‘No room for complacency’ in tourist industry despite record year– ITIC 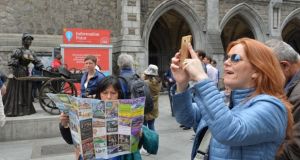 A drop in the number of British tourists to Ireland is a cause for concern despite an overall growth in the market in 2017, a tourism body has said.

Chairman of the Irish Tourist Industry Confederation (ITIC) Maurice Pratt said that there is no room for complacency despite a three per cent growth in this year’s tourist figures.

Mr Pratt called for greater investment by State agencies in attracting British tourists to the country after the number of such visitors dropped by seven per cent this year.

In its annual review, ITIC, the umbrella group for businesses in the sector, said that a seven per cent drop in British visitors is a cause for concern.

Speaking on RTÉ’s Morning Ireland , Mr Pratt said that it is important not to “price ourselves out of the market.”

“The US market grew 15 per cent, European tourism is up four per cent, UK tourism is down seven per cent. The balance was an overall increase of three per cent, a record year.

“We can’t afford to have complacency even though it was a record year. It is a worry and concern that tourism from Britain is down, our biggest, most important market. Following the Brexit vote, sterling dropped, making the UK a more attractive prospect for European visitors because of the strong euro versus weak sterling.”

Overall visitor numbers from Ireland’s nearest and largest tourism market fell by almost 140,000 to 2.08 million in the first seven months of the year, a fall of more than 6 per cent when compared with the same period last year, recent CSO figures show.

Mr Pratt said that investment from State agencies was down the last seven to eight years. “That needs to be reversed,” Mr Pratt said, “ we need to spend more money attracting British tourists into Ireland.”

He said he anticipates there will be strong growth from the US in 2018 because of a direct increase in air access from US cities. “We’re in a market where tourists have to arrive by boat or plane.

“Access to Ireland is crucial so it’s great to see an increase in air access in particular from the US.

“US tourists tend to spend more when here. They spend longer in Ireland and tend to go out to the regions.”

He said that it is important that Ireland be considered value for money, saying it is a “crucial metric as an industry and whether they feel they got value for money while here.”

“Value for money ratings have held up well which is good news, but we cannot afford to be complacent.”

With regard to Brexit, Mr Pratt said that round one of the Brexit negotiations was positive.

“The seamless Border, common travel area retained, regulatory alignment. The key issues in round two will be access aviation, freedom of the skies. From a tourism point of view it is important that we maintain the current situation.