Dublin hotel room growth may be less than expected in 2018 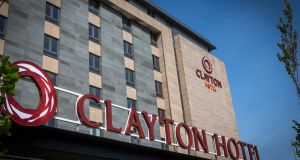 Dalata, the group behind the Clayton and Maldron brand names, is set to bring more than 500 rooms to Dublin market

The supply of hotel rooms in Dublin is expected to remain tight in 2018, despite the launch of a number of new names, and the extension of several existing hotels.

Indeed while 2018 “will be the first time in almost 10 years that Dublin will see a meaningful increase in new room supply”, Davy says that this growth may actually be less than expected, which means “ a moderate level of supply tightness will remain”. It expects about 1,300 new hotel rooms to open in Dublin city this year, with more than 500 of these coming from extensions, bringing supply up by 6 per cent. This is the same as a forecast last week by property group Jones Lang LaSalle.

The upsurge in supply is expected to come from a number of new openings in Dublin, including the Iveagh Garden Hotel on Harcourt Street and the Devlin Hotel in Ranelagh, while Dalata itself will provide 551 of these new rooms, through developments such as the Clayton Charlemont near the Grand Canal.

Construction on the Hodson Bay Group’s first Dublin hotel on Dean Street began in December and is due for completion in March 2019. The group also operates the Hodson Bay and Sheraton properties in Athlone, and plans to operate a four-star hotel in Dublin with 234 bedrooms.

However, supply will remain tight because on a net basis, Dublin will only see 800 new rooms this year. This is because Dalata is set to close two hotels. It has a lease on the 392-room Ballsbridge Hotel until October 2018, with a view to extending it until March 2019, but it is then set to be re-developed by Chartered Land.

Dalata will also close the 111-bed Tara Towers Hotel this year, as it prepares for its redevelopment as a 140-bed 4-star Maldron Hotel.

Some TV makes us cry. The question is, do we want to? 05:18
Stocktake: Investors becoming wary of big tech 05:10
Residential property transactions fell sharply last year 05:04
A two-bed apartment for €619,000? Pull the other one 05:00
Stocktake: More stocks hitting ‘ludicrous’ levels 05:00