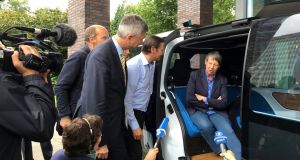 Seven weeks before they face re-election, German politicians have performed a remarkable handbrake turn in the growing Dieselgate scandal.

After a two-year avalanche of revelations – from diesel emissions manipulation to claims of cartel collusion – German politicians will give car executives an unusually chilly reception in Berlin on Wednesday.

At an emergency “diesel summit” increasingly jittery federal politicians and leaders of car-building states – Bavaria, Lower Saxony and Baden Württemberg – will read auto executives the riot act over their handling of a scandal with growing political and economic consequences.

Politicians want auto executives to go beyond software updates for problem vehicles, and agree to component replacements, at an estimated cost of at least €1,000 per vehicle, to reduce harmful emissions from diesel engines.

Bavarian state premier Horst Seehofer said he was “not averse” to permitting model or test cases against car companies, with the terms of any verdict or settlement applicable to other claimants.

Their U-turn could be a bid to placate German voters before the September 24th election – or it may prove a turning point in the European approach to the diesel scandal.

While VW has agreed a €22 billion settlement with the US authorities, where the legal system allows class action lawsuits, the car group denies it has legal cases to answer in Europe, where class action suits are not common and individual car-owners must sue.

With 28 German cities under pressure to improve air quality, Wednesday’s meeting will also discuss measures to minimise the impact of possible bans on companies and private drivers, many with older diesel vehicles.

One proposal from state leaders of Bavaria and Lower Saxony, respective homes of BMW and VW, is for tax subsidies to encourage motorists to buy new vehicles. That has sparked a furious reaction from opposition parties, consumer groups and the influential Bild tabloid. “Hands off our tax money!” it growled on Tuesday. Given multibillion euro car industry profits, voters are likely to view any subsidy as a reward for massive fraud.

With motor industry executives on the back foot, German environment groups – not invited on Wednesday – insist that only component fixes will guarantee diesel cars meet EU emissions norms.

But the industry is wary: besides having to swallow the additional costs, managers fear replacing car parts will create new problems such as altered emissions parameters, requiring new permits or additional emissions-based tax payments.

Hanging over the automotive and emissions issues at Wednesday’s summit is jostling for attention between Dr Merkel’s CDU/CSU camp and its SPD junior coalition partner.

Sensing a chance to damage the Merkel camp, the SPD officials have launched a volley of attacks against transport minister Alexander Dobrindt. His loyalty to the German car industry, one senior SPD official sniped on Twitter, made Mr Dobrindt the most unsuitable political appointment “since Caligula named his horse a senator”.

Germany’s political gear-shift on Dieselgate is palpable even from the most prominent absentee at Wednesday’s emergency summit. Chancellor Angela Merkel is on holidays but, through her spokeswoman, made clear she hoped for a meeting that would “criticise what needs to be criticised, but always in the awareness that we are dealing with a strategically important industrial sector for Germany”.

Germany’s car industry employs at least 800,000 people directly, many more indirectly, and contributes over €400 billion to the economy annually.

“We need a strong, innovative but also an honest auto industry,” said Ulrike Demmer, the chancellor’s deputy spokeswoman. “By honest, the federal government demands openness and transparency from the auto industry at the summit, that everything is put on the table.”

With 20 parties attending, discussing claims of crooked practices going back years, it will need to be a very big table.