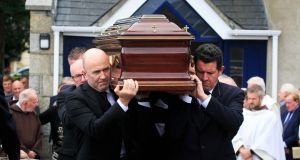 The remains of Robert (Pino) Harris leave The Church of the Assumption of the Blessed Virgin Mary following his funeral in Dalkey, Dublin.Photo: Gareth Chaney Collins 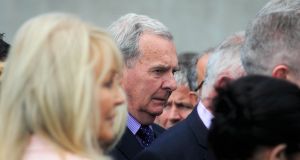 Sean Quinn attends the funeral of Robert (Pino) Harris at The Church of the Assumption of the Blessed Virgin Mary, Dalkey, Dublin. Photo: Gareth Chaney Collins 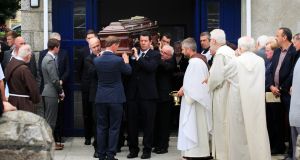 The remains of Robert (Pino) Harris leave The Church of the Assumption of the Blessed Virgin Mary following his funeral in Dalkey, Dublin. Photo: Gareth Chaney Collins 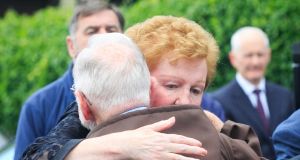 The funeral has taken place of Robert “Pino” Harris who died unexpectedly at the age of 75.

Mourners at The Church of the Assumption of the Blessed Virgin Mary, Dalkey heard from chief celebrant Br Bryan Shortall who called Mr Harris a “visionary”.

“Robert “Pino” Harris was most generous throughout the decades in fundraising campaigns,” according to co-celebrant Br Kevin Crowley of the Capuchin Day Centre. He also praised his help with soup kitchens and his generosity to people at Christmas time.

At a mass attended by members of the motoring industry Mr Harris’s wife, Denise, thanked everyone for their support and said she had lost her husband and her best friend. She described him as the most wonderful man she had ever known.

Former customers of Ireland’s largest truck importer were in attendance at the mass including businessmen Sean Quinn and Harry Crosbie, while the charity sector was well represented with John O’Shea of Goal in attendance. Additionally, a cross section of the motoring industry were at the mass including Alan Nolan, the director general of SIMI and Austin McHale, a businessman but also a well-known former rally driver.

The mourners heard of Mr Harris’s hard work and dedication to the people he worked with as well as his family. “He always called the business his family,” Br Shorthall said. An early riser, Mr Harris worked hard but liked his leisure too, with classical music being a particular favourite.

The son of a Limerick scrap dealer, Mr Harris entered the trucking industry after encountering Hino, a Japanese brand virtually unknown in Europe at the time, at an overseas motor show in the 1960s. He began importing the trucks into the Republic in 1968 with his company J Harris Assemblers. He later expanded the business.

In the mid-1990s, his three truck franchises - Hino, Isuzu and Iveco - mopped up 25 per cent of the Republic’s market for heavy goods vehicles. The Hino brand became strong in the construction industry with a 40 per cent market share of cement mixers for decades.

Mr Harris was also a prolific property investor, and is believed to have made millions buying and selling land in west Dublin. Known as a “hands on” operator in business, a number of his staff remained with him for decades.

Despite his wealth, Mr Harris was said to have maintained a relatively simple lifestyle, living for many years in Phibsborough, before moving to Sorrento Road in Dalkey. He married late in 1993 after the death of his mother, and had no children.

New measures to cut costs for businesses using 1800 numbers 13:52
Ireland has fifth-largest number of billionaires per capita in the world, says Oxfam 13:43
Who are Ireland’s 17 billionaires? 13:19
Trade tensions still weighing on global growth, IMF warns 14:08
Why has the pension age question suddenly become an election issue? 12:06