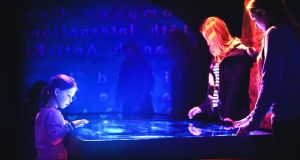 Epic, which also houses a genealogy centre, has been shortlisted for the European Museum of the Year Award 2018 and nominated for the Children in Museums Award 2017 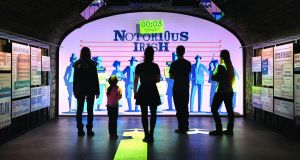 Epic Ireland, the digital museum located in the CHQ building in Dublin’s docklands, is on track to become profitable later this year or early in 2019 on the back of a surge in visitor numbers.

“Every month is better than the last one in terms of visitors,” managing director Mervyn Greene, said.

“In January, we were running at 200 to 250 per cent year-on-year growth and have an ambition of at least 90 per cent growth over the year. Given that we are outperforming our forecast already, it is possible we may achieve up to 155,000 visitors this year,” he added.

The tourist attraction occupies a significant portion of the vaults under CHQ, the building which was acquired for €10 million in 2013 by Greene’s stepbrother, the former Coca-Cola chairman and chief executive Neville Isdell.

The world’s first fully-digital museum, which opened in May 2016, was privately funded by Mr Isdell after the government axed plans to support the multimedia experience.

Mr Greene said about one-third of visitors to the museum are Irish, while another third are from regions where the diaspora typically ended up.

“There has been bigger footfall in the area generally of late but the real underlying reason for the growth in visitors is simply down to word of mouth and great Tripadvisor reviews. We are now ranked eighth in a list of 554 things to do in Dublin, up from 30th a year ago. We also have the highest star rating for a customer attraction in Dublin ... and are in the top tier along with many of the best-known European visitor attractions,” Mr Greene said.

“You come to Epic you get a good history lesson, you get a good understanding of the diaspora. We’ve been told consistently that what visitors are learning here gives them a good sense that makes it easier to understand other attractions they go to.”

Epic also houses a genealogy centre, and the Department of Foreign Affairs recently provided funding for the museum to add an historian-in-residence post.

The museum does not disclose revenues but the most recent accounts available for Epic Ireland show accumulated losses of €1.8 million for the 12 months to the end of December 2016.

Mr Greene said given the huge influx of visitor numbers to the museum, he was expecting Epic to break even ahead of schedule.

“The museum will be sustainable from either late this year or early into next depending on how much we put back into Epic as we are continuing to invest in it,” he said.