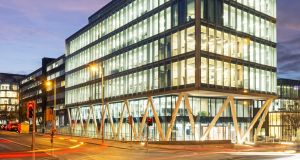 The Velasco building on Grand Canal , Dublin, which was let to Google in 2017.

Tech companies are expected to continue to dominate Dublin city centre’s office stock in 2018 with Facebook and Google alone on track to occupy 4 per cent of all commercial office space.

Analysis from real estate company Lisney highlight’s that Facebook and Google will occupy 38,500 and 74,600 sq m respectively in the capital as vacancy rates reduce to record lows.

Dublin currently has a vacancy rate of 8.7 per cent, with 6.9 per cent in the city centre. Rates this low haven’t been seen since 2000, Lisney says.

The report notes that 189,000 sq m of space is due to come on stream this year, with 37,000sq m of that located outside the city centre. Of the city centre space due to be completed this year, 68 per cent is already pre-let or reserved.

Analysis of 2019’s figures, meanwhile, suggests that construction of commercial office space needs to “ramp up significantly in order to keep pace with predicted demand”. The current Lisney estimate suggests 2019 completions amount to less than the space already occupied by Facebook.

“There is evidence of blue-chip international companies winning out over indigenous Irish companies. In reality indigenous businesses are struggling to match the rent paying ability of overseas occupiers,” he added.