Number of visitors jumped 25 per cent in nine months to September, figures show 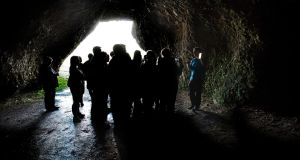 Tourists at the Cushendun caves in Co Antrim, on a ‘Game of Thrones’ tour. Photograph: Mark Marlow/Pacemaker

Northern Ireland has become a much more popular holiday destination for people living in the Republic, according to latest tourist figures which show that 353,000 people living in the State took trips to the North and spent £60 million (€68 million) there in the first nine months of 2017.

According to latest visitor statistics the number of people from the Republic visiting the North jumped by 25 per cent in the nine months to September and they spent 45 per cent more than they had done over the same period in 2016.

In total 3.8 million people from across the world visited Northern Ireland in the first nine months of last year and spent a record £747 million – delivering an estimated £2.7 million boost to the economy each day.

Overall, residents from the State spent 771,000 nights in Northern Ireland from January to September 2017.

The number of “holiday trips” made by residents in the Republic to the North in the period jumped by 57 per cent to 157,000, with the figures also showing a 35 per cent jump in the number of business trips to 24,000.

“Northern Ireland enjoyed overall growth from Great Britain, Europe and North America in the first nine months last year. Closer to home, Northern Ireland residents took more staycations and visitors from the Republic of Ireland continued to be motivated by value for money and spent £18 million more than the same period last year, an increase of 45 per cent,” he added.

According to Tourism NI, well-established visitor experiences from Titanic Belfast to the Causeway coastal route and locations from the television series Game of Thrones continued to attract visitors to the North.

But Mr Grillen said there had also been a change in the way people view the North, suggesting it was successfully appealing to a new generation of visitors who are less influenced by Northern Ireland’s recent troubled past.

“Our research shows that perceptions of Northern Ireland as a holiday destination have improved demonstrably in the Republic,” he added.