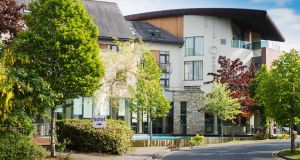 The Osprey Hotel in Naas, Co Kildare, is owned and operated by PREM Group.

The Osprey Hotel in Naas, Co. Kildare, has commenced work on a €1.1 million spa as part of a major renovation project.

The spa has been designed by celebrity architect and star of RTÉ’s Home of the Year Hugh Wallace.

The 10,000 sq ft facility, which will be over two floors, is due to open in May and will incorporate a thermal suite with several heating and cooling experiences. The spa will be temporally closed to allow the work take place.

The Osprey Hotel is owned and operated by PREM Group. Commenting on the works, PREM Group chief executive Jim Murphy said it had been “an incredibly busy 18 months”, which began with the upgrading of the gym.

“We are confident that the new spa will be a great addition to the overall complex and will be popular among residents and clients of the hotel on a regular basis,” he said.