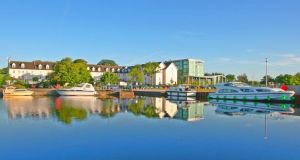 The Hodson Bay Hotel group now obtains 63 per cent of its bookings via phone.

Irish hoteliers are launching a fightback against the giants of the tourism industry, as they try to reduce dependency on the likes of Booking. com and Expedia to secure bookings. For consumers, the move means that the best hotel rates may now be found directly on hotels’ own websites, rather than the big-name online travel agencies (OTAs).

Stung with commission rates of 15-20 per cent, which can see a room booked for €100 via an OTA or online travel agency shrink to just €80 when it comes to a hotel’s revenue, Irish hotels are increasingly trying to incentivise guests to sidestep the travel behemoths and book directly with them by offering a host of perks and discounts.

Dalata, for example, which has more than 5,000 hotel rooms across the UK and Ireland, offers discounted food at its properties on Parnell Street, in Ballsbridge and at Silver Springs, while Athlone’s Hodson Bay offers free breakfast and a spa voucher, and Cork Airport Hotel promises savings of €10 – all for bookings made directly.

According to Helena Rowe, account manager with digital marketing company Netaffinity, as OTAs have grown their share of the bookings market the amount of money hotels lose in commission to them has also grown, noting that OTAs now typically account for about 30-40 per cent of the total market. This means that hotels could see their revenues fall – even if bookings hold steady – unless they boost bookings from other channels.

“We would never to say to a hotel you need to come off Expedia, but we do say that they need to be smarter about how they get their business in,” says Rowe, adding, “the idea is that a booking that comes directly is better value”.

One hotel group which is achieving just that is the Hodson Bay Group, which operates the Hodson Bay, Sheraton Athlone, and Galway Bay Hotel, as well as Dublin’s forthcoming Dean Street Hotel, which is due to open in March-April 2019.

Garry Walsh, commercial director with the group, says the company now obtains 63 per cent of its bookings via phone, noting that the drive towards direct bookings all comes down to the “cost of acquisition”.

Bookings generated by phone, for example, have a cost of about 6-7 per cent of the room rate, or 5 per cent via the hotel’s website. Via an OTA, however, the cost can be as much as 20 per cent, with aggregators charging hotels a premium for preferred positions on their platforms, which can, in turn, help to boost bookings.

While Walsh concedes that “OTAs are a very important source of revenue into the hotels”, overdependence can cause its own problems.

“If you’re beholden to the OTA you have to question the strength of your own offering,” he says, adding that the hotel group will look to up its focus on direct bookings into 2018, and this will continue to include restricting the number of rooms it lists on OTAs.

“While we might not win that battle, we’re certainly up for the battle,” he says.

Dalata is taking a similar approach, and launched a book-direct initiative “Click on Clayton” last year, with a similar campaign to follow this year for its Maldron sites, in an effort to encourage more direct bookings.

This offers a €10 discount off the quoted rate on its website.

“OTAs have been a very positive addition to the industry for hotels that do not have large international brand names over the door. If OTAs did not exist, international visitors would not be aware our Maldron and Clayton hotels when deciding where to stay when visiting Ireland,” said Dalata director Dermot Crowley.

“We would like Irish consumers to book directly on our websites as it both saves us commission costs, and gives us a more direct relationship with our customers.”

For hotel guests, the switch back towards hotels’ own booking teams means that many of the better rates are now found on hotels’ own websites, rather than on the big-name OTAs.

“It’s not every hotel, but definitely more and more,” says Rowe, while Walsh adds that it would be true “the majority of the time, but not all the time,” noting that in the low season in can be more difficult to adopt this strategy.

“You want to be competitive through every channel,” he says.

The deals for booking direct:

Grand Canal Hotel, Dublin Save €10 and get free parking

The Dawson Hotel, Dublin Save €5

Kilmurry Lodge, Limerick Save 5 per cent

Barry’s Hotel, Dublin Save 10 per cent