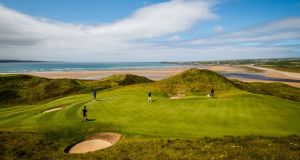 The west of Ireland golf club that last year hosted the Irish Open has run out of its own cash due to the impact of Covid-19.

In a stark assessment of Lahinch Golf Club’s finances, chairman Martin O’Sullivan has told members “overnight and without warning” that the club’s projected income for 2020 reduced by almost €3 million due to the collapse of overseas visitors as a result of Covid-19.

Lahinch golf club counts former Ireland rugby captain Paul O’Connell as one of its members. In his report Mr O’Sullivan has stated that the impact of the Covid-19 pandemic on the club’s finances following the Irish Open and capital spend was like “the perfect storm”.

At peak summer season, visiting golfers pay €240 to play a round of golf at Lahinch. At the start of 2020 the club was projecting green-fee income of €2.5 million.

Mr O’Sullivan stated that the drop in green-fee income highlighted the club’s “over-reliance” on overseas visitors.

Mr O’Sullivan’s report has been circulated to members ahead of the club’s deferred agm, which will be held virtually on Thursday evening via Zoom.

At the meeting, members will be asked to sanction a 7.5 per cent subscription hike for 2021 to help plug some of the funding gap left by the drop in green-fee income.

In his report Mr O’Sullivan stated that “the impact of the Covid-19 pandemic on the club’s finances cannot be overstated enough”.

He said the club was projecting an operating loss of €400,000 for 2020 even after a “significant reduction in overheads”.

Overheads have been reduced by €920,000 while the club has availed of €250,000 in income support from the Government’s wage subsidy scheme, which, he said, had allowed the golf club to maintain full-time staff.

Mr O’Sullivan stated that the club’s balance sheet for 2020 will take a €1.24 million hit after depreciation costs are taken into account.

“These negative results come on the back of a significant deficit for 2019, a consequence of hosting the very successful Irish Open.”

Over the past three years, according to the report, the club has invested more than €2.7 million in capital expenditure including essential repair on the club coastal defences and the development of the club’s indoor performance academy.

“These significant projects reduced our cash reserves, and when the financial impact of hosting the Irish Open is also taken into account, the onset of the Covid-19 pandemic was like the perfect storm hitting the club, from a financial perspective.

The report notes that, “Despite the financial impact of Covid-19 on the club finances, the general perception is that the club continues to be ‘cash rich’ and financially secure”.

However, it states that while the club’s efforts in establishing a contingency fund for unexpected eventualities over the past number of years has proved extremely beneficial, “all of these funds have now been utilised and the club has no cash of its own”.

The club is projecting cash in hand at the end of 2020 and 2021 of more than €1 million, but these funds are made up of deposits received from the club’s green fee visitors, according to the report.

Mr O’Sullivan stated that the club, in taking a pragmatic, prudent approach, “intends to ensure that the club trades its way through the current crisis and, over time, build up cash reserves similar to what occurred following the financial crisis of 2008-12”.

Michael Vaughan, a hotelier and member of the club, said on Wednesday that the importance of the golf club to local tourism “can’t be overstated” and it had “sustained Lahinch tourism for 127 years”.

Mr Vaughan, owner of Vaughan’s Lodge Hotel, which overlooks the links course, said: “It would be catastrophic if the golf club failed in its commercial endeavours because all of the hotels in the village rely on the golf club for the majority of their business.

“Over the years, Lahinch golf club has been resilient. It bounced back from the recession and I believe that it will bounce back from this.”

The plummeting green income “is no surprise”, he added. “Seventy per cent of my business comes from golf and there were no overseas visitors playing golf in Lahinch this year.”

“The club is well managed and has a strong balance sheet. In the long term the dividend that the golf club has provided to Lahinch will be there again. I have no doubt about that.”

4 Family businesses are welcome winners in the pandemic