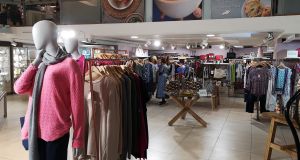 An interior shop of the Kilkenny shop on Nassau Street in Dublin, a popular destination with tourists. New legislation could limit VAT refunds on goods bought by visitors from non-EU countries. Photograph: Crispin Rodwell

Brexit legislation, now going through the Oireachtas, includes a Government proposal to limit VAT refunds to non-EU tourists on goods bought in the Republic to purchases of €175 or more.

A report by economist Jim Power states that the proposal will risk 1,200 jobs in tourism and retail by endangering a measure worth €108.1 million to the economy, particularly outside Dublin.

The current relief, known as the retail export scheme, allows tourists from outside the EU to claim back VAT on crafts and gifts bought in the Republic during their stay.

Most of the goods bought by tourists cost less than the new €175 threshold for the scheme proposed in the Brexit Omnibus Bill, which is now making its way through the Oireachtas.

“Introducing the €175 limit on the retail export scheme would undermine competitiveness and decimate the Irish tourism and retail sectors, particularly along the Wild Atlantic Way,” Mr Power said.

He warns that the measure flies in the face of efforts to aid tourism’s recovery from the damage done by restrictions imposed to contain Covid-19.

“The tourism and retail sector sectors have been decimated by Covid-19 and they face a very challenging future. They need as much support as possible over the coming years,” the economist argues.

Mr Power also noted that the new limit would add 23 per cent to the actual price paid for goods here by non-EU tourists, damaging overall competitiveness.

His report, commissioned by an alliance of retailers and tourist businesses, the Stop Another Tourism Tax Campaign, calculates that the exchequer would lose about €7 million in VAT payments from UK visitors if the current regime remains.

However, the loss of spending by visitors from North America, the Middle East, China and Japan, would be significant if the Oireachtas introduces the new limit, the report added.