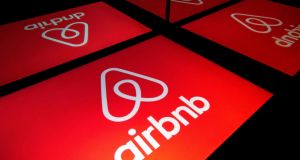 Airbnb’s international arm, which usually accounts for at least half of group profits, was hit harder by the pandemic than the US. Photograph: Getty

Revenues at Airbnb’s main Irish subsidiary halved during the first nine months of the year due to the Covid crisis, according to new figures included in the company’s Initial Public Offering (IPO) prospectus.

Airbnb International, which is headquartered in Dublin, recorded turnover of $1.34 billion (€1.13 billion) for the January to September period, as against $2.6 billion for the same nine months a year earlier, as the impact of the coronavirus pandemic was felt.

The group also advised in the prospectus that its 2015 to 2019 tax years remain subject to potential examination in the Republic. It also warned that European Commission State Aid investigations into countries, including Ireland, such as the one conducted against Apple, could result in changes to the tax treatment of its foreign operations.

“Uncertainty in the application of taxes to our hosts, guests, or platform could increase our tax liabilities and may discourage hosts and guests from conducting business on our platform,” it said.

Airbnb’s IPO prospectus, filed on Monday with the US Securities and Exchange Commission, highlights the impact of the Covid crisis and how its business is now heavily reliant on domestic travel in its home market. Airbnb’s international arm, which usually accounts for at least half of group revenues, was hit harder by the pandemic than the US.

For 2019, the group recorded turnover of $4.8 billion, for which the international unit was responsible for $3 billion. This compares to revenue of $3.7 billion a year earlier with the Dublin-based subsidiary accounting for $2.5 billion.

Airbnb International, which employed over 1,360 people at the end of 2018, is responsible for all the short-term accommodation provider’s business outside of the US and China.

The company late last year leased more than 3,715sq m of space at the Reflector office building on Hanover Quay beside its existing European headquarters buildings and plans to build a physical link between the two blocks.

Airbnb’s IPO filing reveals the Irish business had long-lived assets linked to property leases that amounted to $86.4 million at the end of 2019, as against $26 million a year earlier.

The home rental group has not turned an annual profit since its launch in 2008, and warned this will likely also be the case this year despite it being profitable in the third quarter. It said it expected a decline in bookings and rise in cancellations in the last three months of the year.

The IPO filing, published ahead of Airbnb’s anticipated stock market debut in December, showed a dramatic recovery in its fortunes, after the coronavirus outbreak dragged down its core home rental business during the first half of the year. – Additional reporting: Reuters