Caveat: With his aura of invincibility dimmed, Ryanair chief is well out of his comfort zone

July 31st, 2019: Ryanair boss Michael O'Leary has told staff in a video message that as many as 1,500 jobs are at risk at the airline due to a slump in earnings, Brexit concerns and delays to expansion plans. Video: Ryanair 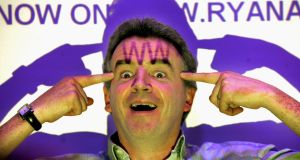 The news that up to 900 jobs may have to be cut at Ryanair is not just a new departure for the airline. It is also, clearly, uncharted territory for its chief executive Michael O’Leary. With his aura of invincibility dimmed, he is well out of his comfort zone. This was clear from the awkward video he made for staff announcing the bad news.

We are used to seeing the Ryanair chief in one of just a handful of modes. There is the classic, clichéd, bombastic O’Leary. We see this version much less often these days than in years past. But he still pops up occasionally: the O’Leary who tells his target – greedy workers, complaining customers, useless politicians – to f*** off and take their sob stories with them. This version, although it comes with ease, is calculated.

In the last five years, as part of Ryanair’s Damascene conversion to enhanced levels of customer service, we have seen more of the self-deprecating, less aggressive O’Leary. In this mode he often volunteers harsh criticism of himself. It is far less offensive than classic O’Leary, but no less of an act.

There is still an undercurrent of self-regard to this side of him, as he deliberately and obviously strains to talk himself down for a purpose, when we all know he doesn’t really believe it. This is humble-bragging O’Leary, the sort who arrived at the official launch in 2014 of its new customer service strategy carrying a live puppy for effect.

The O’Leary in this week’s video to staff, however, bore no relation to either of the two men above. He looked washed out and sounded unsure of himself, a consequence, perhaps, of the realisation that Ryanair under his leadership is in deep difficulty and there is nobody else left to blame. He looked exposed.

Watch the video. You will see a vague outline of Old O’Leary, with the open necked plaid shirt and the glasses perched upon his head as he sits on the edge of a table. But the trademark impishness isn’t there. O’Leary, who has so often relied on his sharp oratorical skills to vanquish enemies, is reading from cue cards held by someone standing out of shot. He is reading them poorly too, stumbling over his words, jerking his eyes off camera, and pausing unnaturally in mid-sentence to read ahead.

If the arrogant, loudmouth version was O’Leary Mark One, and the mawkish humble-bragger was Mark Two, perhaps this fumbling, stumbling, apologetic and worried O’Leary is a deliberately-constructed Mark Three, there to set the appropriate tone for engagement with the workers whom Ryanair is about to sack.

4. The O’Leary who nearly sh*t himself

Or maybe he is simply not cut out for this industrial relations lark. As he pleads his case in the video over the 21 per cent drop in quarterly profits, the Boeing delivery delays and Brexit, O’Leary makes a reference to consulting with Ryanair’s “union partners”. He would have choked upon this phrase a few years ago before the airline was unionised against his desire.

In her ever relevant 2004 book on the airline – Ryanair: How a Small Irish Airline Conquered Europe – former Irish Times journalist Siobhán Creaton recounts a tale from a source of how O’Leary’s true self was exposed as he tried to handle a 1998 baggage handlers’ strike. It gives an insight into how much O’Leary hates staff issues.

On the day of the planned strike O’Leary arrived in the airport before the baggage handlers were due to start their shift at 6am in an attempt to persuade them to call it off. According to those present, O’Leary looked “physically ill” when it became obvious that the strike would go ahead.

“That was the first time I saw him nearly sh*t himself,” said a source of Creaton’s. “Personnel issues were not his best point. It scares the life out of him. He felt the situation was out of his control. Someone else had targeted his style and there was nothing he could do.”

Cutting 900 staff to boost Ryanair’s profits should, you might assume, appeal to Mean Old O’Leary, the bean-counting accountant who sees only the bottom line and to hell with everything else. It should be a chance for him to burnish again his proud capitalist-arsehole credentials after faking niceties for the last five years for the sake of Always Getting Better, Ryanair’s customer service improvement programme.

Yet he was clearly worried about announcing the job cuts. On Tuesday, the day before the video emerged publicly, Ryanair’s annual report was released, and revealed that O’Leary’s basic pay was being cut in half to €500,000. The airline didn’t try to draw attention to it, but it knew it would be noticed and remarked upon by journalists. In hindsight the timing of it looks like carefully-crafted optics, demonstrating to all staff that O’Leary is also affected by Ryanair’s current profits slump.

The media’s greatest flaw when it comes to reporting O’Leary’s antics has always been to present him as some sort of caricature, a hard-hearted robot with a calculator where his soul should be.

That is, of course, a mistruth. He is a complex and, as those who know him attest, occasionally a sensitive individual. His speech at the private memorial service in 2017 for the deceased former Ryanair director James Osborne, when O’Leary choked up as he read a touching poem for Osborne’s children, demonstrated his complexity, not that any proof is required to show a man has a heart.

It may grate with O’Leary that he is no longer seen as invincible. But as he sets out to fix Ryanair’s problems, the ego-driven version of O’Leary should take solace from the fact that the public loves a good redemption tale. Unbridled success is a big story. A subsequent downfall is an even bigger story. But if you have the ability to turn things around and succeed once again, that is the greatest story of all.