Covid-19: Utilities, banks and insurers must do the decent thing 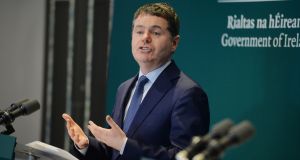 Minister for Finance Paschal Donohoe has leaned heavily on the banks that were bailed out a decade ago to remind them of their responsibilities to society. Photograph: Alan Betson

Past scandals have sometimes made us doubt the extent of it, but a sense of decency has always been an integral part of being Irish. Our society is a million miles from perfect. It is as riven with problems and inequities as any other. But, still, an inherent sense of fair play is elevated as a principle among Irish people in their dealings with one another.

That is not to pretend that we live in some sort of a genial Utopia. We do not. But you could easily encounter evidence of this casual decency every day without ever really thinking about the full extent of it.

Bus drivers are routinely thanked. Older people have doors held open for them by strangers as they go about their business. People struggling at car boots with buggies or heavy bags tend to be helped. Somebody will eventually show concern if someone else appears upset in public. Assistance is usually offered.

It isn’t always universal and Ireland is not the Narnia of Nice. But even if fairness and compassion are not uniquely Irish values, they are common here. Casual decency is an expected element of participation in society. Irish people simply get this.

The Covid-19 crisis that has crashed upon our shores has brought a welcome reminder that, as troubled as it can be, Irish society isn’t all that bad. The usual casual decency has been distilled into a real, tangible sense of community concern. People are organising assistance for each other online, fetching shopping for older people, sharing ideas to keep each other’s kids entertained. They are also prepared to turn their own lives upside down to keep others safe.

It isn’t strained, hackneyed or begrudged. This spirit is genuine and organic.

That sense of decency has also been apparent in the business community. It is very rare for a situation to emerge that requires all strands of society to pull together without resistance. But this is one, and businesses have mostly acted in lockstep with wider society to do the right thing during this crisis.

Sometimes it is just the little things, such as supermarkets introducing priority hours for the elderly to do their shopping. But at other times, the willingness by some businesses to do the right thing, to act decently even when there is no profit in it for themselves, has appeared stark.

With a handful of early exceptions, publicans, for example, have shown themselves to be far more socially responsible than they usually get credit for. That is because most publicans have an instinctive understanding of the needs of the communities in which they operate, because they are a part of them.

About 7,000 pubs nationwide have shut voluntarily in an effort to stop the spread of a disease that threatens the lives of vulnerable people. In other countries, such as France and Italy, businesses have been ordered to close by their governments. People assume that the Irish Government did the same.

But the truth is that the State had no legal power to order such closures here. Such laws may be in train here for Covid-19, but they were not required to get things moving. Publicans simply accepted they could not keep people safe on their premises and agreed to close voluntarily, without holding out for a compensation scheme first or resorting to legal technicalities.

They did the decent thing because it was what Irish society expected them to do.

Other businesses, too, have voluntarily closed to fight Covid-19. Restaurants, cafes, attractions, retailers, hairdressers, cinemas, cultural venues; many have shut their doors. Legally speaking, none had to close at all. If any are willing to withstand the inevitable criticism and social policing that would follow, they could try to stay open. But most will not try. They will do the decent thing.

If being decent is to remain an inherent principle in our society, it has to be predicated on it being a two-way street. If you show decency, then you ought to be able to expect to receive it in return. It shouldn’t matter if the rules are not completely in your favour. It is not a matter of technicality. If you are sound in your actions, then you ought to be looked after if it causes you trouble.

When publicans acceded to mass closures, putting their solvency and personal livelihoods on the line, they placed their trust firmly in the rest of society. They trusted that fairness would later be shown to them in the financial maelstrom that followed. They had no piece of paper in their hands to guarantee that this would happen. No contract or law. It is simply expected.

The Government appears to recognise the importance of this, although more direct help from the public purse will eventually be required as the crisis deepens. The State, through the Revenue Commissioners, already knows it will have to be flexible with SMEs who owe taxes such as VAT. They are starved of liquidity and the State should not help to put them under.

Paschal Donohoe, the Minister for Finance, has also leaned heavily on the banks that were bailed out a decade ago to remind them of their responsibilities to society. Those responsibilities have now crystallised into a clear expectation that the normal credit rules must not apply for viable businesses and households that are struggling from the sudden impact of Covid-19.

Those must be given leniency as a matter of course, even where they are not technically entitled to it under their loan agreements. If those banks are to serve society, then they must adhere to that society’s unwritten rules.

Utilities must go along with this too. And so must insurers. The online publication the Currency has reported this week that many publicans may not be reimbursed by their insurers for their trading losses if they remain closed.

If insurance companies hide behind such technicalities now, that would be an abhorrence, a blatant disregard for the common expectation that in this time of crisis, everybody behaves with fairness and decency.

When they accepted the sacrifice and closed, pubs and other businesses put their trust in the rest of us that they would be looked after for doing the right thing. Ministers must lean on whomever necessary to ensure that happens.