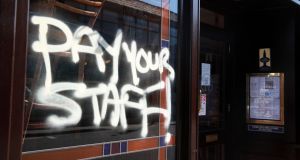 We have always loved a good pantomime villain, somebody for us all to hiss at and boo. The concept is particularly well suited to the modern social media age, when it seems everything must be viscerally judged as either black or white, wholly right or plain wrong.

Similarly, prominent individuals are quickly judged by the herd as either good or evil, saints or villains. Nuance is so passé.

We have no real pantomime villains of our own in Ireland at the moment because we’re facing a national emergency. That means we’re in the throes of a collective effort and criticising each other might be bad form. So this week, we borrowed Britain’s pantomime villain instead. You do what you must in a crisis.

Tim Martin, the chairman of pub group JD Wetherspoon, was pilloried on both sides of the Irish Sea for being mean to his staff during the coronavirus lockdown, which is akin to drowning puppies in the current climate.

He is also a bit arrogant, he sports a fierce-looking mullet, his pubs are no craic at all, and he is virulently pro-Brexit, which matters a lot here. He’ll do us nicely, thank you.

Martin’s litany of faux-pas began last week as the UK government was dithering over shutting down its pubs to fight the virus. Completely misreading the shifting mood of the British public, he argued it was “over the top” to temporarily shut his stock market-listed business to fight a disease that kills old folks.

Then he completely flamed out, blurting with fact-free abandon on television that there was “hardly any transmission of the virus within pubs”. It made him appear clueless, mercenary and cold.

The British duly shut their pubs last Friday. Days later, a clearly unabashed Martin recorded a video message for his 43,000 mostly low-paid staff, who suddenly had no jobs to go to. Instead of metaphorically putting his arm around his frightened workers and reassuring them that the sun would soon rise again, he used the opportunity to cement his villain status.

The UK’s state scheme to cover 80 per cent of the wages of laid-off workers may not be operational until the end of April, leaving a gap of up to five weeks for many. Some employers have pledged to cover wages in the interim. But what did Martin do? He told his staff to go find jobs in Tesco if they couldn’t wait.

What a guy. The company also nixed the staff’s bonuses.

It looks like JD Wetherspoon is here to stay, its villainish founder and all

JD Wetherspoon, which runs more than 900 establishments including about a dozen in Ireland, has been back-pedalling furiously since Martin’s PR disaster. The company has since suggested its staff might actually get the 80 per cent on April 3rd, next week.

The damage-control operation hasn’t stopped Martin from being dragged through a ditch backwards in all major UK media outlets, as well as being criticised heavily on social media as the epitome of an uncaring boss who, his critics claim, left his workers to fend for themselves as orphans in the storm.

The offending video clip in which he suggests they try Tesco has also been widely shared in Irish social media circles. Look at him, the selfish British capitalist. And, sure, look at us over here in Ireland, all digging in together with our publicans at the vanguard. So we hissed at the Brexiteer all over again.

Martin’s image as a cartoon-villain pub company boss jars with the norms of Irish hospitality. There are few national figures in the fragmented pub industry here; in general, we prefer to like our publicans if we can because we go to their establishments for craic. To be purveyors of craic, they must possess some of it themselves. If Irish publicans can’t be wholesome, they at least have to be roguish to fit in. Not villains. They must be liked.

We also hold an unshakeable belief in the inherent superiority of our pubs over their British counterparts. Unlike in the UK, our establishments tend to be called after people or family names, emphasising their more social nature compared with British pubs, which often recall animals and inanimate objects.

But we may yet have to get used to Martin around these parts. It is likely that in coming years JD Wetherspoon will become a significant player in the market.

It currently has four pubs in the north and seven pubs and one hotel in the Republic. Its €18.5 million new Keavan’s Port hotel on Dublin’s Camden Street was due to open this summer, although that would now be a baptism of fire. Other new establishments are planned in Waterford and Galway and it is still sniffing around sites near Dublin.

The economic crisis caused by Covid may even hasten JD Wetherspoon’s growth here. Discounters tend to thrive in times of economic uncertainty, which is partly why Aldi and Lidl had such a good recession last time out. The Wetherspoon model, disparaged by Irish pub purists, is built upon cheap food and drink – and prices for sites.

If drink price becomes relevant again, so will JD Wetherspoon, and it may also get opportunities from distressed sales of Irish pubs in a downturn. So it looks like JD Wetherspoon is here to stay, its villainish founder and all.

The thing about Martin, as anyone who has ever met him will tell you, is that he is actually quite likeable in the flesh and, yes, quite good craic. Perhaps he cultivates his cartoonish image. If so, he could have cultivated it a bit more carefully this week with his Covid antics.