Hydrogren buses will produce no pollution from exhausts 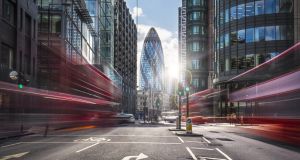 Wrightbus has a long-standing business relationship with Transport for London. Photograph: iStock

Wrightbus in Ballymena, Co Antrim has won a multi-million pound contract from Transport for London (TfL) to build 20 pioneering hydrogen double decker buses which will produce no pollution from their exhausts.

TfL said it will invest £12 million (€14 million) in the zero-emission buses and their associated fuelling infrastructure and it expects “new jobs” to be created in Wrightbus as a result of the contract.

TfL will receive more than £5 million in funding from the European Commission and £1 million from the UK’s Office of Low Emission Vehicles towards the cost of the new green buses.

The order represents a major boost for the Ballymena-based manufacturer, whose founder Dr William Wright has been one of Northern Ireland’s most vocal supporters of Brexit.

Wrightbus is one of the North’s leading exporters, selling buses designed and manufactured in the North to customers in locations including Las Vegas, Hong Kong , Chile and Dublin.

Last year however Wrightbus had warned that it was experiencing difficult conditions in the UK market because potential customers were either postponing or delaying ordering new buses because of “continuing uncertainty” in the UK.

Wrightbus has a long-standing business relationship with TfL. It previously supplied the iconic red Routemaster double decker bus, known as the Boris bus, to TfL before the mayor of London Sadiq Khan discontinued the contract.

Dr Wright, who celebrates his 92nd birthday this year, has throughout his long career championed new innovations and environmentally friendly technology to reduce fossil fuel usage and harmful emissions.

The William Wright Technology Centre at Queen’s University in Belfast was established three years ago to discover and develop new technologies for “advanced passenger transport in the UK and around the world”.