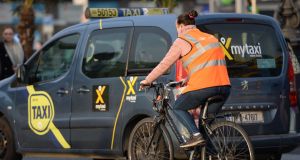 MyTaxi said cash-only users who incur a charge will be blocked from using the MyTaxi app until fees have been fully paid. Photograph: Alan Betson

MyTaxi is introducing a €5 cancellation fee for users who cancel taxis after hailing them.

In a statement the company said the charge was being introduced in a bid to change customer behaviour and boost the reliability of its service.

MyTaxi issued updated terms and conditions on Thursday in which it stated that while users can cancel their trips at any time, they may be charged a fee from late June onwards.

“This is a charge we never want our passengers to incur and is intended to change behaviour when our fleet is most under pressure and to boost the reliability of our service when our customers most need it,” a spokesman for the company said.

He said MyTaxi’s data showed that more than 50 per cent of cancellations take place between Friday and Sunday, when its network of vehicles is most pressed.

MyTaxi outlined a number of instances in which the fee might apply, including cancelling a taxi two or more minutes after the driver has accepted the request.

The company also said the charge would apply to users who have agreed a pick-up point but are not at it within five minutes of the driver’s arrival.

MyTaxi said cash-only users who incur a charge will be blocked from using the MyTaxi app until fees have been fully paid.

New users of the service can cancel a taxi up to three times without incurring a charge, it said.

The company did not indicate whether drivers would be charged in instances where they cancel on users.

However, the spokesman said it understood that driver cancellations “can be extremely frustrating for passengers”, and claimed MyTaxi had managed to reduce these to an all-time low.

“Research has shown that passengers are prioritising a more reliable service from the taxi industry. We are confident that MyTaxi drivers will continue to offer an ever-improving and market-leading service to customers in Ireland,” the spokesman said.

“This policy change will enable MyTaxi to service more customers and expand our fleet to support greater reliability in the long run,” he added.

MyTaxi said the cancellation fee is in line with industry practice in the Republic and is already applied by a number of its competitors here.

In the UK, a £5 (€5.79) fee applies but the company did not disclose how much consumers are charged in other countries.

MyTaxi also said on Thursday that it was introducing terms for a subscription service, which it is trialling. This service would allow users to pre-purchase time-limited plans that could be used to obtain discounts on rides.

The company, which was previously known as Hailo, is shortly to rebrand to Free Now.

The business, which was bought by Daimler in 2014 and merged with Hailo two years later, has more than 500 employees in 26 European offices. Its service is available in 100 European cities, including Dublin, Cork, Limerick, Galway and Waterford.