Regulators seek to cut Dublin Airport charges to €7.50 a head 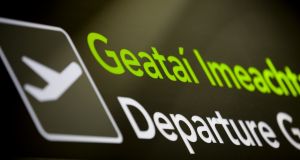 DAA has said it can pay for its investment project without increasing its current charges, but is likely to reject any reduction in its prices. Photograph: iStock

Regulators want Dublin Airport to cut the passenger charges it levies on airlines by up to 20 per cent to €7.50 a head from next year in a proposal that has angered the gateway’s owner, DAA.

The company also argued that the regulator is effectively seeking a cut of more than 20 per cent as its actual charge is closer to €9.30 a-head.

“The most pressing issue at Dublin Airport isn’t our charges, which are already low, it’s about investing for Ireland’s long-term future and CAR’s proposal won’t allow us to do that,” Mr Philips warned.

DAA’s investment plan is based on keeping last year’s charge of €9.65 a-head over the 2020-2024 period rather than increasing it.

The company maintains that Dublin charges 30 per cent to 40 per cent less than most rivals, while it handled a record 31.5 million passengers in 2018 and this year will host 48 airlines serving 203 destinations.

CAR commissioner Cathy Mannion predicted that the proposed cut would benefit passengers through lower air fares while allowing the airport to provide them with a quality service.

“It allows Dublin Airport deliver key pieces of national infrastructure, which will facilitate a significant increase in the capacity of the airport,” Ms Mannion said.

She argued that as air travel is a competitive market, airlines would pass on savings such as reductions in airport charges to their passengers.

However, a DAA spokesman responded that there was no evidence for this. “CAR is being naive if it thinks that lower charges will lead to lower ticket prices,” he said.

The commission believes the number of passengers using Dublin should grow to 37.8 million in 2024, allowing the airport cut the cost per head.

At the same time, revenues from shops, restaurants and bars there could hit €296 million in 2024 from €257million next year, the CAR estimates.

The regulator says that it differs with DAA on Dublin’s operating costs, which the commission believes will increase more slowly than the airport company calculates.

Similarly, the CAR believes that the cost of borrowing the money needed to pay for the extension of Dublin Airport’s facilities will be lower than DAA’s estimates.

The commission cut the total €1.8 billion bill by €1.48 million after assessing the investment plan “for efficiency”.

DAA, airlines and other interested parties have two months to respond to the commission’s proposal.

The regulator will consider these for three months before finally setting the 2020-2024 charges before the end of the year. “We will consider all the evidence given to us,” Ms Mannion said.