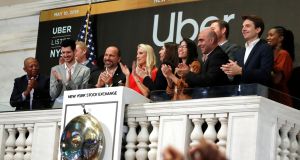 Uber Technologies’ shares fell nearly 9 per cent on their New York Stock Exchange debut on Friday, marking a rocky start for one of the most high-profile US companies to go public since Facebook seven years ago.

The fall in shares undermined Uber’s strategy of pricing its oversubscribed IPO conservatively at $45 per share to avoid a repeat of rival Lyft’s stock market struggles following a strong debut in March.

It also left the company’s market value below its last private funding round, with a market capitalisation of below $74 billion. Uber last raised money from Toyota Motor in August at a valuation of about $76 billion.