Declan Ryan plans IPO for ‘the Ryanair of Latin America’ 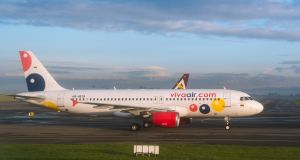 Viva has become the third-biggest carrier in Colombia, where it started seven years ago, and the number two operator in Peru where Viva Air Peru started operations in 2017

Viva Air, the Latin American group of carriers owned by a founder of Ryanair, has plans for a third airline in the region plus an initial public offering, to cash in on strong demand for discount air travel.

The company aims to sell shares in New York within two years, Viva’s biggest shareholder, Declan Ryan, said in an interview in Lima. The shares could also be listed on another exchange, such as Colombia’s, he said.

“We’re effectively the Ryanair of Latin America, ” said Ryan, who was one of the founders of the budget Irish carrier. “The middle class in Latin America are moving every day. Colombia has a huge middle class so we’re seeing a lot more people hopping on our planes.”

Low cost carriers are disrupting the transport industry across Latin America by luring travelers away from long bus journeys while forcing older airlines to cut prices. Viva has become the third-biggest carrier in Colombia, where it started seven years ago, and the number two operator in Peru where Viva Air Peru started operations in 2017.

The company is considering Ecuador or Central America as the base for the third airline, Ryan said.

As a precursor to the IPO, Ryan’s Irelandia Aviation said Thursday that it had sold a $50 million (€44.45 million) stake in Viva Air to Cartesian Capital Group, a New York-based private equity firm. The money will help fund the airline’s pending deliveries of 50 new Airbus SE 320 jets.

“Now that we have the bedrock of the equity in we can focus in on the IPO,” said Ryan. “Airlines needs to be publicly listed for access to capital.”

Ryan said that at least $100 million of Viva Air’s equity will be put up for the IPO and that he expects the offering will value the firm, which is based near Medellin, Colombia, at more than $500 million.

Colombia and Peru will probably each get 20 of the new jets, with the rest going to the new base, Ryan said. In Central America the company favors Costa Rica and El Salvador, he said. Venezuela represents a “huge opportunity” when it overcomes its current crisis, he said.

Ryan sees Viva Air flying as many as 100 planes in the region within a decade. – Bloomberg

1 Irish company paid €1.2m a year by collapsed Blumenthal-linked Australian restaurant
2 Why bosses should not be afraid of speaking out on Instagram
3 Hugo MacNeill steps back from Goldman Sachs role
4 Should AIB compensate me for upsetting letter on arrears?
5 Irish economy to grow by 3.4% this year, predicts EY
6 ‘Germans are very efficient and reliable. Cancelling is alien to them’
7 Hammerson appoints lead for move into housing
8 Greencoat Renewables buys Clare wind farm for €35.4m
9 Tax shifts won’t drive multinationals out of Ireland - Moody’s
10 Legal eagles yet to land; economy to grow 3.4% this year; and CEOs on social media
Real news has value SUBSCRIBE