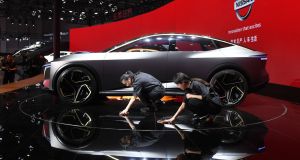 There was an annual increase of almost 20 per cent in the number of private cars taxed for the first time in the Republic in April, reversing a trend of decline seen in recent months.

Some 13,794 private cars were licensed in April, according to data from the Central Statistics Office (CSO), a rise of 19.4 per cent on the same month in 2018.

In the first four months of the year, a total of 64,655 new private cars were taxed, a fall of 7.6 per cent compared with the same period last year while the number of imported cars taxed increased by 3.8 per cent.

The CSO figures are based on cars taxed for the first time, as opposed to those issued by the Society of the Irish Motor Industry (SIMI), which track new registrations. There is often a lag between the two as a new car cannot go on a public road without a registration plate but there may be a delay in owners taxing their new purchases.

The figures show how diesel cars are decreasing in popularity, accounting for 47.8 per cent of all new private cars licensed in the first four months of the year, compared to 55.9 per cent in the same period in 2018.