BMW reports first loss in a decade at automotive division

Provision for legal costs over alleged collusion on emissions jump to €1.4bn 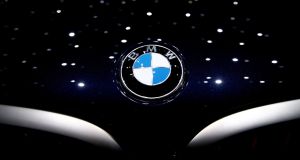 BMW’s automotive division swung to a loss for the first time in a decade as car prices slumped and a legal provision over alleged collusion ballooned to €1.4 billion. Excluding the set-aside, earnings at the carmaker’s main unit fell by 42 per cent to €1.1 billion in the first quarter.

Price competition in some markets and spending on new technology cut into profit, the luxury carmaker said Tuesday in a statement. To deal with the pressures, BMW in March announced a €12 billion savings plan, culling models and cutting development time.

While the second half of the year should improve with sales of new 3-Series and X7 sport utility vehicles, trade tensions are on the rise again.

Orders for the X7 were exceeding all expectations, chief executive Harald Krueger said. The company is also co-operating with Daimler in autonomous driving, and the two companies merged their mobility services earlier this year.

Though there has been speculation about further cooperation plans, Krueger poured cold water on hopes of a cross-shareholding on Tuesday.

“We’re focusing on the current projects, mobility services and autonomous driving, but any sort of cross-shareholding I can definitively rule out,” Krueger said in a media call.

BMW will contest the allegations on collusion on cleaner-emission cars by the European Commission with all legal means possible, it said.

Group earnings before interest and tax declined 78 per cent to €589 million, with the result at the “light end” of expectations, Jefferies analyst Philippe Houchois said in a note.

Excluding the potential fine, automotive return on sales fell to 5.6 per cent compared with 9.7 per cent a year ago.

BMW declined 1.96 per cent to €72.55 at 3pm in Frankfurt trading. The stock has gained 3.3 per cent this year, compared with an 18 per cent rise in the Stoxx 600 Automobiles and Parts Index.

The US and China facing off on trade could cost BMW a low three-digit million euro amount this year, Mr Peter said.

BMW reiterated its outlook for the year, expecting earnings before tax to fall “well below” the year-ago level while deliveries will rise slightly. – Bloomberg