Ride-hailing app valued at $70bn at close, much below expectations 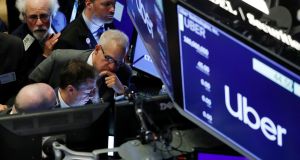 Uber’s public debut marks a milestone for a company that has reshaped transportation in many cities but also proven deeply divisive among regulators. Photograph: Reuters

Uber’s shares sank almost 8 per cent below their offer price on Friday, giving the ride-hailing company a disappointing market value of below $70 billion (€62 billion) — a far cry from the $100 billion valuation it had until recently hoped to achieve.

Uber’s drop ranked as one of the eight worst first-day share price performances for a US-listed IPO raising over $1 billion, according to Dealogic.

The faltering debut left investors questioning the appetite for unprofitable car-booking companies that have relied on flood of private capital to fund heated expansion and competition. It followed the poor performance of rival Lyft, whose shares are trading well below their March IPO price and which also slipped sharply on Friday.

Officials at Citadel Securities, the designated market maker, said sentiment had probably being hampered by the broader sell-off in US equities. The S&P 500 index and Dow Jones Industrial Average traded in negative territory most of the day on global trade concerns. However, Uber and Lyft continued to slide even as the main US indices reversed course in the late afternoon. Lyft shares fell 7.4 per cent to $51.09 — compared to an IPO price of $72.

“One day isn’t going to measure our success or failure,” said Dara Khosrowshahi, Uber’s chief executive, . “You can’t control the week in which you went public. We had a situation with the president and China that created a lot of volatility and uncertainty.”

He added: “What’s important is that we got our deal done. We raised over $8 billion in primary capital, which is going to be an important engine to grow.”

Mr Khosrowshahi said Uber had priced its IPO “at the right level” and had carefully considered which investors would be allocated shares. “We put the stock in really high-quality hands who are going to be shareholders not just for the next year but the next three to five years,” he said, adding that “a lot” were investors in Expedia, where he was chief executive before joining Uber in 2017.

But some investors said the market response reflected scepticism over the lossmaking business, which has grown aggressively by heavily subsidising fares and paying bonuses to drivers.

“This is an exit strategy for private investors. When you look inherently at the business model and how it’s designed, it’s not sustainable,” said Michael Underhill, chief investment officer at Capital Innovations. – Copyright The Financial Times Limited 2019