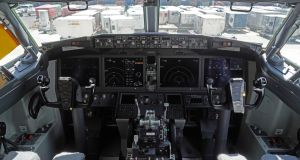 The cockpit of a Boeing 737 Max 8. Boeing has provided American airlines’ pilots with basic information about MCAS, but it has not updated the official manual with a full explanation about how it works. Photograph: Dimas Ardian/Bloomberg

Weeks after a deadly crash involving a Boeing plane in October, company officials met separately with pilot unions at Southwest Airlines and American Airlines. The officials said they planned to update the software for their 737 Max jets, the aircraft involved in the disaster, by around the end of 2018.

It was the last time the Southwest pilots’ union heard from Boeing, and months later the carriers are still waiting for a fix. After a second 737 Max crashed on Sunday in Ethiopia, US regulators said the software update would be ready by April.

“Boeing was going to have a software fix in the next five to six weeks,” said Michael Michaelis, the top safety official at the American Airlines pilots’ union and a Boeing 737 captain. “We told them, ‘yeah, it can’t drag out.’ And, well, here we are.”

This delay is now part of the intense scrutiny over Boeing’s response after the first air disaster, a Lion Air crash that killed 189 people in Indonesia. The second crash, involving an Ethiopian Airlines flight that killed 157 people, bore similarities to the first, pointing to potential problems with the automated system that requires the update.

The planned fix was “designed to detect the problem”, said Jon Weaks, the president of Southwest’s pilots’ union, “and keep it from recurring.” Boeing officials told Southwest union leaders that they did not believe any extra training was necessary beyond informing the pilots of how the software fix would function.

The potential similarities between the two crashes were central to regulators’ decision to ground the entire 737 Max line, a family of aircraft that has been in service for nearly two years. Boeing is now in damage-control mode as carriers cancel flights and try to limit disruptions. Boeing declined to comment for this article.

Along with the grounding, Boeing has been forced to halt deliveries of the jets, one of its best-selling aircraft. Authorities are trying to determine exactly what went wrong, while a senior Democratic lawmaker is planning to examine Boeing’s ties with its regulators.

Congressman Peter DeFazio, the chairman of the house transportation committee, has said he will investigate the Federal Aviation Administration’s (FAA) certification of the 737 Max, including why the regulator did not require more extensive training for pilots.

To qualify to fly the aircraft the pilots at American were given 56 minutes’ iPad training and about a dozen white papers on the differences between the Max aircraft and previous 737 jets, union officials said.

Weaks said his members were trained with an e-learning module on a company-issued iPad that consisted of under three hours of video presentations about the differences between the Max and an earlier Boeing plane.

Both Southwest and American now say they expect to have simulators including the 737 Max systems by the end of this year. At least American ordered the simulator after the Lion Air crash.

The meetings last year between Boeing officials and the unions were cordial but direct. The pilots from Southwest and American who met with Boeing were frustrated that they had not been notified of the newly installed software system in the 737 Max planes before the crash in Indonesia.

The manoeuvring characteristics augmentation system, or MCAS, is an automated system intended to prevent the aircraft from stalling. “It was a very frank discussion,” said Michaelis, the union’s safety chairman. “This is to our knowledge the first time pilots were not informed of a major system on an airplane that could affect flight controls.”

The pilots demanded more information about the system. Michaelis said it had been mentioned once in the appendix of the official aircraft manual, but without any explanation about what it was or did.

For days after the Ethiopian crash, Boeing and the FAA stood by the safety of the aircraft

In response to the pilots’ request, Michaelis said, Boeing concurred. The company has since provided the American pilots with basic information about MCAS, but it has not updated the official manual with a full explanation about how it works.

Michaelis said Boeing had partly attributed the delay to the recent government shutdown, which caused a backlog at the FAA. Daniel K Elwell, the acting administrator of the FAA, said on Wednesday that the 35-day partial government shutdown that stretched from December until late January “did not cause any delay in work on the software”.

For days after the Ethiopian crash, Boeing and the FAA stood by the safety of the aircraft. As regulators around the world grounded the jet, the FAA resisted doing the same.

DeFazio said he stepped out of a hearing on Wednesday morning to speak with Elwell about the aircraft. DeFazio said Elwell assured him there was no cause for alarm.

Within hours, president Donald Trump announced the Max would be grounded. “One of my staff, her phone went ‘bing’ and there it was,” DeFazio said.

Elwell and the FAA’s top safety official, Ali Bahrami, visited Capitol Hill on Thursday to brief members of the house and senate about the agency’s decision-making after the crash in Ethiopia. Elwell also made the rounds on morning television shows as his agency continued to face questions about its response to the crash, as well as the earlier accident in Indonesia.

“We’re confident in the safety of the airplane,” he said on CBS This Morning. “What we don’t know is if there’s a linkage between those two accidents, and now that we have the new evidence to suggest there very well may be, we grounded the airplanes to find the linkage.”

Trump, at the White House on Thursday, said he hoped the Boeing aircraft would be back in the air soon. “They have to figure it out fast. They know that. They’re under great pressure.”

The three American airlines that operate 737 Max aircraft – American and Southwest operate Max 8s and United flies the Max 9 – have scrambled to limit any disruptions caused by the groundings.

The airlines have shifted other available aircraft to replace the jets, cancelled less popular flights to use those aircraft for busier Max routes, and rebooked some customers on other airlines. Cancellations will vary by the day based on the availability of other aircraft.