Dublin Airport going to tender with deal worth €350m

Two contracts for catering services set to go to tender, including one for 21 food and drink units 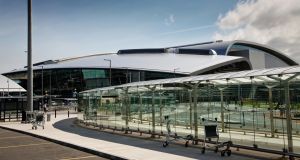 Dublin Airport is about to launch a major tender process including two separate contracts, one of which will comprise 21 food and beverage outlets in a deal forecast to have total revenues of about €350 million.

Airport authority DAA said it’s looking to “transform” the food and drink offering at the airport across Terminals 1 and 2.

The DAA’s move is a significant new departure that will ultimately give more flexibility over the 21 units. Additionally, it won’t have to go to the market with 21 separate tender processes.

Transfer of business legislation (known as TUPE) means staff currently employed across the units won’t lose their jobs but will simply transfer to working for another operator as long as a restaurant is replaced by a restaurant and a bar by a bar.

Because of the size of the tender being offered, it is expected that large operators including FTSE-listed SSP Group and US headquartered HMSHost will scope out the contract.

On this occasion, the DAA has opted to offer 10-year contracts, longer than those typically awarded in international airports. The reason behind this is that Dublin Airport is looking to work in partnership with the new concessionaires over the next decade.

“Dublin Airport has an ambition to become a destination for food, by helping our passengers feel a sense of connectedness to Ireland and by ensuring that everyone is well-fed and ready for their journey every time,” its managing director, Vincent Harrison, said.

“Passenger expectations of airport food have increased significantly, and we recognise that the food we offer at Dublin Airport is a key driver of overall passenger satisfaction,” he said, adding that they’re looking for a “step change”, aiming to install a “world-class food offer”.

More than 4,000sq m of space is available across the 21 food and beverage concessions while the four bars have a combined total of 1,350sq m. Some of the units going out to tender include the Alcock and Brown and the Garden Terrace in Terminal 1, Burger King in T1 and 2, the Slaney Bar and the Chocolate Lounge in T2 and the Gate Clock in pier three. One new bar unit will be added in the international departures area of T2 .

Dublin Airport expects the new units to be open for business from early 2020, with the existing outlets to continue operating in the interim. The offer will likely prove attractive given the airport’s growing footfall. In addition to its 31.5 million passengers last year, there are about 19,000 staff based on the campus. In January and February, it posted record passenger numbers.