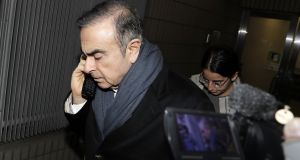 The removal of Mr Ghosn, credited for rescuing Nissan from near-bankruptcy in 1999, had caused much uncertainty about the future of the alliance, and some speculation the partnership could even unravel.

The companies, together with junior ally Mitsubishi Motors, on Tuesday said the chairman of Renault would serve as the head of the alliance but – in a critical sign of the rebalancing – not as chairman of Nissan.

Nissan has said that Mr Ghosn wielded too much power, creating a lack of oversight and corporate governance. It was not clear who would become Nissan’s chairman, vacant since Mr Ghosn was arrested in Japan in November.

But the carmakers gave no indication of any immediate change in their cross-shareholding agreement, one which has given smaller Renault more sway over Nissan.

They said the so-called Restated Alliance Master Agreement that has bound them together so far remained intact.

“We are fostering a new start of the alliance. There is nothing to do with the shareholdings and the cross-shareholdings that are still there and still in place,” Renault chairman Jean-Dominique Senard said at a news conference.

“Our future lies in the efficiency of this alliance,” he told reporters at Nissan’s headquarters in Yokohama.

Mr Senard also said he would not seek to be chairman of Nissan, but instead was a “natural candidate” to be vice-chairman.

Nissan holds a 15 per cent, non-voting stake in Renault, whose top shareholder is the French government. – Reuters