Europe is falling behind in the electric car race 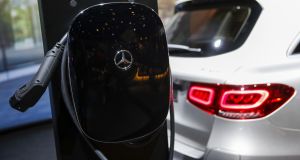 An electric car recharging ahead of the Geneva International Motor Show on Monday. Some European carmakers are said to be delaying electric car launches until the next round of European emissions legislation is introduced. Photograph: Stefan Wermuth/Bloomberg

Europe’s car companies are falling behind China and the United States in their efforts to sell electric cars with key launches deliberately delayed, according to a new report.

European carmakers are, according to a new report from environmental pressure group Transport & Environment, deliberately delaying new electric car launches until the next round of European emissions legislation is introduced.

In 2018, the US market overtook Europe as the second-largest market for electric cars, behind China. That’s almost purely down to legislation, according to the report, as China has invested €120 billion into promoting and subsidising electric car use. In the US, the California Zero Emissions regulation and the substantial Federal tax credit for electric cars is driving EV sales there.

Lucien Mathieu, e-mobility analyst with Transport & Environment, told The Irish Times: “The car industry is gearing up to comply with the 2020-21 Co2 standard and will soon start boosting the sales of plug-in cars.

“EU carmakers have seen electric cars as a necessary evil to comply with regulation and evidence shows they’ve been suppressing supply and sales in 2018, in an attempt to protect their diesel business. Meanwhile China is racing ahead and even Trump’s America has now overtaken Europe thanks to the Tesla-driven EV sales.”

With the EU’s stricter Co2 limits not being applied until 2020 and 2021, and the advent of “super credits” which trade off electric car sales against the production of more polluting combustion-engined models, European customers are going to have to wait at least another year before electric car sale become truly widespread.