Why has Boeing pulled its 737 Max fleet – and what took it so long?

Plane has become fastest selling in history, with more than 5,000 orders placed 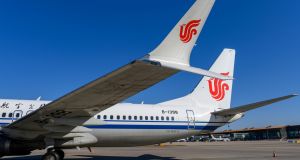 There are fears that the 737 Max model contains a potentially fatal safety flaw. Photograph: Reuters

Donald Trump grounded Boeing’s 737 Max fleet on Wednesday, days after the second fatal crash involving the plane in five months led to governments around the world – but initially not the US – suspending their use of the plane. Boeing then decided to pull its entire 737 fleet worldwide. What do we know about the crisis so far?

Why has Boeing grounded its entire fleet of 737 Max aircraft?

There are fears that the 737 Max model contains a potentially fatal safety flaw after it was involved in two crashes in the last five months that killed 346 people. On Sunday 10th March an Ethiopian Airlines Max 8 model of the 737 aircraft was involved in a crash near Addis Ababa that killed all 157 people on board. In October a Max 8, operated by Lion Air, crashed into the sea near Jakarta, killing all 189 people on board. On Wednesday 13 March, Boeing said it would suspend its entire global fleet of all 371 models of the aircraft currently in operation, after the US Federal Aviation Administration (FAA) imposed a temporary ban on the model. Dozens of countries had already imposed bans earlier in the week.

Why did it take four days for Boeing and the FAA to act when other authorities imposed bans much sooner?

Announcing the bans, both the US and Canadian regulators cited new evidence to suggest a link between the two fatal crashes. Both crashes are still under investigation but preliminary satellite tracking data suggests they were caused by a faulty automated system designed to prevent the plane from stalling, known as MCAS.

Marc Garneau, Canada’s transport minister, said the new data revealed “vertical variations” in the Ethiopian Airlines flight similar to those seen before the crash of the Lion Air flight.

What is the problem with the MCAS system?

We still don’t know, but the data suggests it may have been activated on both flights. Experts speculate that malfunctioning sensor readings pushed the nose of the Lion Air flight downward. The pilots appeared to be struggling with the system as their repeated attempts to right the jet by pulling the nose up again appeared to be overridden by MCAS. The limited data so far available about the Ethiopian Airlines flight suggested a similar pattern of variations of altitude in 15- to 20-second bursts.

What do we know about the Addis Ababa crash?

The black box recorder has been recovered from the wreckage, which should reveal technical flight data as well as the cockpit voice recordings. Until that evidence is analysed and released, the only available data has come from tracking websites such as Flightradar24.

Flight ET302 took off from the Ethiopian capital, Addis Ababa, at 8.38am local time (5.38am GMT) and crashed approximately six minutes later, on its way to the Kenyan capital, Nairobi, in rural land near the town of Bishoftu.

According to the airline, the captain of the plane had reported difficulties and requested permission to turn back.

Flight radar data shows that the aircraft was climbing erratically, with an unstable “vertical airspeed”, or height.

Conflicting witness reports from locals on the ground have been given to TV crews. One man told the BBC that the plane had dropped straight from the sky, with no visible flames before impact; another told CNN that he had seen smoke coming from the back of the aircraft before it crashed.

How does the crash compare to what we know about Lion Air Flight 610 near Jakarta?

The undisputed similarity is that both planes that were the same model of Boeing 737: a new iteration, the Max 8, that first flew in 2017 and had only been in service a matter of months for Lion Air and Ethiopian Airlines; and in both cases, the pilots reported difficulties immediately after takeoff.

While the investigation is still continuing into the Lion Air crash, the plane showed sharp changes of altitude, which suggested the pilots may have been effectively trying to wrestle against in-flight control systems designed to prevent a stall.

How important is the 737 Max plane to Boeing?

The plane has become the fastest selling in history: more than 5,000 orders placed, and more than 350 in service. At its officially listed price ($121 million (€107 million) per plane), that amounts to more than $600 billion worth of planes sold already and being manufactured, though most airlines will have bought them at a substantial discount.

Boeing’s 737 was already the most common plane in the sky, a short-haul workhorse. The latest iteration promised significantly greater fuel efficiency, more seats on a similar-sized plane, and a longer range – a promise that has seen airlines all around the world clamour to buy them. Ryanair alone has signed up for 150.

How does Ethiopian Airlines’ safety record stack up?

Ethiopian has been regarded as a standard bearer among African airlines, on a continent where aviation safety has lagged behind the rest of the world. Despite Ethiopian Airlines’ mostly good record, a notable exemption was a crash in 2010 off Lebanon that killed 90 people and was ascribed to pilot error by investigators, although the airline disputed the findings.

But it has not had great fortune as an early adopter of Boeing planes: an electrical fault saw a 787 Dreamliner catch fire at Heathrow in 2013.

How have other regulators reacted to Addis Ababa crash?

Despite initial claims from the US that the plane was safe, dozens of countries suspended operations of the aircraft in and out of their airports, and many airlines have said they are grounding their fleets.

The European Union followed the Republic, the UK, France, Austria, Germany and Malaysia have suspended the operation of all 737 Max models in their airspace. Singapore, Australia and New Zealand’s regulators have suspended the operation of 737 Max planes flying into and out of the country. China’s regulator has ordered domestic airlines to suspend 737 Max 8 flights. India, Indonesia, South Korea and Oman have grounded their airlines’ 737 Max 8 jets for inspections. – Guardian service