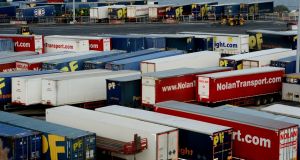 The Government is unprepared for a no-deal Brexit and must ramp up preparations to deal with the United Kingdom crashing out of the European Union, a group representing freight companies has said.

Freight Transport Association Ireland, which represents the country’s logistics industry, called on the Government to intensify contingency plans for a hard Brexit and to share them with the industry.

Sounding a note of caution 24 days before Brexit, the group said that unless the Government came up with more intensive plans, the country faced “significant threats” to supply chains and “major disruption” to the supply of more than 60 per cent of the ambient food product consumed in Ireland that comes from the UK.

FTA Ireland urged the Government to take a “pragmatic approach” to regulations covering trade with a “third country”, which the UK will become after Brexit.

“The checks which could be implemented on arriving and departing goods in this case would be hugely disruptive both to businesses awaiting deliveries of raw materials or finished items, and to the end users who will face delays, disruption and rising costs,” said the group’s general manager Aidan Flynn.

The warning came as the UK government issues an updated guidance note telling companies importing animals, animal products and high-risk food that should expect an increased number of checks on goods at designated points of entry and Border inspection posts at sea ports and airports.

The note offered no guidance on what would happen imports crossing the Irish Border from the State.