Aircraft lessors unlikely to be troubled by Boeing 737 Max groundings 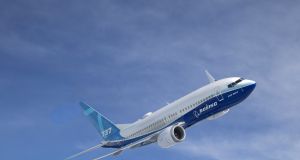 Aircraft lessors in the Republic are unlikely to immediately feel the pinch from the decision to ground the global fleet of Boeing 737 Max 8s, industry sources have suggested.

However, those lessors expecting deliveries here could claim for compensation for a late delivery, one prominent industry expert said, adding that they may not be successful given the unusual circumstances involved.

The Boeing 737 Max family of planes is an increasingly popular model for airlines given its efficiency and a number of lessors based in the Republic are awaiting deliveries.

Avolon has agreed to firm orders for 55 Max 8 aircraft, with options for an additional 20, while AerCap put in an order for 100 with deliveries due to start this year. So far, it has a portfolio of five, according to regulatory filings.

SMBC Aviation Capital has five owned, three managed and about 110 committed while Goshawk owns 24. General Electric Capital Aviation Services (GECAS), which operates out of Shannon but has its headquarters in the US, has an order book in excess of 170 aircraft. Fly Leasing, led by former Aer Lingus chief executive Colm Barrington, has two in its portfolio.

Ryanair, meanwhile, will begin taking delivery of the first of up to 200 Boeing 737 Max 8 200s that it has on order for early this year.

Reporting from a press conference in Poland, Reuters said Ryanair’s flight schedules wouldn’t be affected by the global grounding of the Boeing 737 Max 8.

“Our fleet of 450 planes includes a lot of emergency planes, which are located strategically,” the airline’s chief legal officer, Julisz Komorek, said.

The global gounding of the Boeing 737 Max aircraft followed the fatal crash of an Ethiopian Airlines flight on Sunday, killing all 157 people on board. Another incident involving the same model occurred just months before.

The last time an entire model of planes was grounded was in 2013 when all of Boeing’s 787 Dreamliners were taken out of service by the US Federal Aviation Authority. Before that, it was 1979 when the FAA ordered a general grounding of an aircraft model following a fatal crash of a McDonnell Douglas DC-10.

In the case of the 2013 grounding of the Dreamliners, a number of aircraft suffered from electrical system problems related to lithium-ion batteries on board. The FAA’s decision, following groundings by Nippon Airways and Japan Airways, lasted for more than three months until April 2013.

While Boeing said as recently as Wednesday evening that it “continues to have full confidence in the safety of the 737 Max”, it ultimately recommended to the FAA that the global fleet of 371 737 Max aircraft be grounded.

US lawmakers said after a briefing with the acting head of the Federal Aviation Administration on Thursday that Boeing 737 MAX 8 and 9 planes will remain grounded for “weeks” at a minimum, until a software upgrade could be tested and installed in all of the planes.

In the case of Norwegian Air, which uses the plane on its transatlantic routes from Dublin, one analyst suggested the issue could cost up to €1.5 million a day. Its chief executive said on Twitter it would be seeking compensation.

1 Suspicions rife as key Brexit trade talks begin in Brussels
2 Life as a Facebook moderator: ‘People are awful. This is what my job has taught me’
3 Corona beer firm reeling after 8% slide due to coronavirus
4 Bank leaked my loan request to family who tried to rip me off
5 How well paid do you think you are? Here’s how to work it out
6 Digicel plots network-sharing deal amid ‘tight’ cash levels
7 We have little chance of building enough homes to meet election promises
8 Coronavirus panic sweeps through global markets
9 Irish in-flight entertainment firm blames coronavirus for closure
10 Flight attendant seeks High Court injunction against Aer Lingus
Real news has value SUBSCRIBE