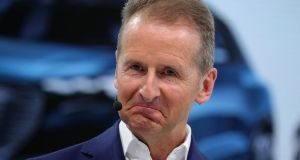 Volkswagen chief executive Herbert Diess: “It was a very unfortunate choice of words”

The US Securities and Exchange Commission sued Volkswagen and its former chief executive Martin Winterkorn over the German carmaker’s diesel emissions scandal, accusing the company of perpetrating a “massive fraud” on S investors.

The news comes as current chief executive Herbert Diess on Friday apologised for using a phrase that echoed a Nazi-era slogan, “Arbeit macht frei,” or “Work sets you free,” which was emblazoned on the gates of Auschwitz and other concentration camps.

“It was a very unfortunate choice of words,” Mr Diess said in his apology. “If I unintentionally hurt feelings with it, I am extremely sorry.”

The SEC said in its civil complaint filed in San Francisco late on Thursday that from April 2014 to May 2015, Volkswagen issued more than $13 billion in bonds and asset-backed securities in US markets at a time when senior executives knew that more than 500,000 US diesel vehicles grossly exceeded legal vehicle emissions limits.

Volkswagen “reaped hundreds of millions of dollars in benefit by issuing the securities at more attractive rates for the company,” the SEC said, adding VW “repeatedly lied to and misled United States investors, consumers, and regulators as part of an illegal scheme to sell its purportedly ‘clean diesel’ cars and billions of dollars of corporate bonds and other securities in the United States.”

The suit seeks to bar Mr Winterkorn from serving as an officer or director of a public US company and recover “ill-gotten gains” along with civil penalties and interest.

Mr Winterkorn, who resigned days after the scandal became public in September 2015, was charged by U.S. prosecutors in 2018 and accused of conspiring to cover up the German automaker’s diesel emissions cheating.

He remains in Germany.

Volkswagen said in a statement the SEC complaint “is legally and factually flawed, and Volkswagen will contest it vigorously. The SEC has brought an unprecedented complaint over securities sold only to sophisticated investors who were not harmed and received all payments of interest and principal in full and on time.”

The carmaker added that the SEC “does not charge that any person involved in the bond issuance knew that Volkswagen diesel vehicles did not comply with US emissions rules when these securities were sold” but repeats claims about Mr Winterkorn “who played no part in the sales”.

A lawyer for Mr Winterkorn could not immediately be reached early on Friday.

Volkswagen has agreed to pay more than $25 billion in the United States in connection with the three-and-a-half-year old scandal, paying claims from owners, environmental regulators, states and dealers, and has offered to buy back about 500,000 polluting US vehicles. That figure included $4.3 billion in U.S. criminal and civil fines.

But the SEC said VW “has never repaid the hundreds of millions of dollars in benefit it fraudulently obtained.”

VW admitted in September 2015 to secretly installing software in 500,000 US vehicles to cheat government exhaust emissions tests and pleaded guilty in 2017 to felony charges. In total, 13 people have been charged in the United States, including Mr Winterkorn and four Audi managers.

1 Chris Johns: Ireland risks populist culture war over property and pensions
2 Javid’s EU divergence plans provoke industry backlash
3 Inbreeding poses major threat to Ireland’s thoroughbred horse sector
4 How to cope with an official audit by the Revenue
5 The Irish economy is thriving but if you’re not feeling it – here’s why
6 Not everyone ‘feeling full benefits of economic growth’
7 Will election mean delay in planned changes to State pension?
8 Slack lease the lure as ESB seeks €168m for Fitzwilliam 28
9 Barclays to cut 100 senior roles as lender seeks to rein in costs
10 Fitzwilliam Card Club casino in Dublin closes with loss of 80 jobs
Real news has value SUBSCRIBE