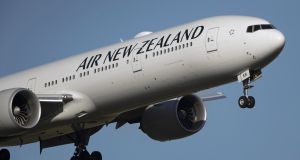 New Zealand’s national carrier, which employs 12,500 people, said the announced number of layoffs was a “conservative” assumption, and that it could rise if the domestic lockdown and border restrictions were extended. File photograph: Brendon O’Hagan/Bloomberg

Air New Zealand said on Tuesday nearly a third of its employees, about 3,500 people, will be laid off in the coming months, as it grapples with severe global travel curbs due to the coronavirus that has forced it to cancel nearly all flights.

The national carrier, which employs 12,500 people, said the announced number of layoffs was a “conservative” assumption, and that it could rise if the domestic lockdown and border restrictions were extended.

Large scale layoffs of its global staff will start this week, the company said.

“Unfortunately, Covid-19 has seen us go from having revenue of NZ$5.8 billion (€3.16 billion) to what is shaping up to be less than $500 million annually based on the current booking patterns we are seeing,” chief executive officer Greg Foran said in an email to staff and customers.

“This has the potential to be catastrophic for our business unless we take some decisive action.”

Air New Zealand is an example of the dire situation facing airlines across the world due to curbs on travel to control the spread of the virus. “We have had to cut more than 95 per cent of our flights here in New Zealand and around the world. The only flights remaining are in place to keep supply lines open and transport options for essential services personnel,” Mr Foran added.

Earlier in March, the New Zealand government offered the airline a $900 million ($540.99 million) lifeline to keep it in the air.

The company also noted that “every dollar we use from this loan facility comes with interest (more than double current interest rates for a household mortgage) and must be re-paid”.

“Burdening our airline with massive debt would significantly lessen our ability to compete with airlines emerging from Covid-19,” said Mr Foran.

He also said that in a year’s time he expects staffing levels to be 30 per cent smaller than it is currently. – Reuters