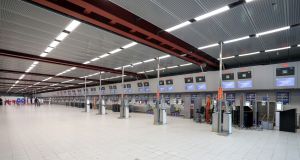 Companies that lease aircraft are hopeful that government stimulus funds can help steady struggling US airlines, as half of carriers worldwide seek rent relief on their planes.

The precipitous drop in demand for air travel caused by the coronavirus pandemic has hurt not only airlines, but also the companies that supply about 40 per cent of their planes, collecting rent from the operators. The stock price for AerCap in Dublin has decreased 65 per cent since the start of the year, while Los Angeles-based Air Lease has fallen 56 per cent.

The $2 tillion (€1.8 trillion) US stimulus bill signed into law on Friday includes no money for the leasing industry per se, nor do the rescue packages governments put forth this month for Norwegian Air Shuttle or airlines in China.

But the law earmarks $58 billion in loans and loan guarantees for US passenger airlines and cargo carriers, with half set aside to pay employees’ wages and benefits, and waives aviation excise taxes for the year. Suppliers from caterers to fuel providers to lessors will feel the trickle-down effect, said Alvin Khoo, chief financial officer at GA Telesis, a midsize Florida company that leases, repairs and sells parts from aircraft.

“Liquidity for your customer is good,” Mr Khoo said. “It’s a significant credit positive for the entire leasing community. How it works its way through the funnel I don’t know, but I’m sure every lessor is calling up the airlines and saying, ‘OK, you just got this cash. Don’t forget us.”

Air Lease was receiving calls for rent deferrals of up to two months as far back as February. Air Lease chief executive John Plueger said on an earnings call that the leasing company had offered to buy planes and lease them back to customers, giving the airlines a cash infusion.

As many as half of global airlines are seeking rent relief now, according to a note from JPMorgan Chase analysts Jamie Baker and Mark Streeter. They estimate as much as 15 per cent of revenue could disappear this year either with lessors’ blessings, or because airlines default.

Air Lease and “to a lesser extent” AerCap maintain sufficient liquidity to weather the global aviation downturn, Mr Baker and Mr Streeter wrote. “After all, it’s not the aircraft leasing CEOs you see on Capitol Hill.”

But aircraft lessors will “very likely have to repossess” planes as airlines fail, S&P Global Ratings analysts Philip Baggaley and Betsy Snyder wrote in a note. They will need to find new customers for those jets, as well as for the 15 to 20 per cent of leases that come due each year. With so many carriers’ worldwide paring schedules to skeleton levels, the lessors lack pricing power when they negotiate new leases.

“Lease rates can fall significantly in an aviation downturn, and leases signed in a downturn will therefore depress revenues for years, even after the airline industry starts to recover,” Mr Baggaley and Ms Snyder wrote.

US airline aid helps lessors, although not as much as government assistance in Asia, Europe or Latin America, where lessors count a greater proportion of their customers, Mr Baggaley said. Still, “leasing companies have sometimes taken advantage of the opportunity to provide financing to a US airline under pressure, but that they think is a long-term survivor.”

Airlines and lessors are trying to work together because when the crisis lifts, airlines will still need planes, and lessors will still need a return on their assets, Mr Khoo said. Lessors “want their customers to survive, so they’re going to be accommodating”. – Copyright The Financial Times Limited 2020