Coronavirus: UK fatalities rise to 1,408 with worst thought yet to come

Measures showing positive results, adviser says, but one-quarter of doctors not at work 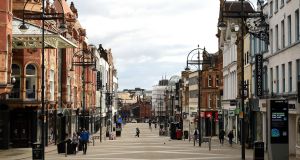 Near-empty street in Leeds: Three doctors have died after working with coronavirus patients and the Royal College of Nursing said nurses were being put at risk because of a lack of personal protective equipment. Photograph: Oli Scarff/AFP

The number of patients being treated for the coronavirus in British hospitals has jumped by 50 per cent since last Friday to 9,000, with 1,000 admitted every day. A quarter of doctors are off work because of the virus or because a family member is ill, according to the president of the Royal College of Physicians.

Chief scientific adviser Patrick Vallance said the lockdown introduced last week was starting to have an effect but he predicted that the worst was yet to come. Britain’s death toll has risen to 1,408, but the number of new deaths reported on Monday fell for the second day in succession.

Sir Patrick said the rise in the number of hospital admissions because of the virus did not represent an acceleration. “Six thousand to 9,000, roughly a 1,000 a day going up in that measure – that’s not an acceleration. That’s quite important. It tells you that actually this is a bit more stable than it has been,” he said.

“I do expect that number to continue. I expect people coming every day to be about that, it may go up a little bit. And in two or three weeks you would expect that to stabilise and to start to go down a bit. That is not a rapid acceleration number. It is an important number, it is a difficult number to deal with and it is a number that NHS [National Health Service] staff are clearly coping with in terms of what they are doing at the moment.”

Andrew Goddard, president of the Royal College of Physicians, said that one in four doctors was off work because of the virus. “At the moment, we think it’s more doctors self-isolating with family members, though there are some off sick themselves,” he said.

“This is really impacting a lot in emergency departments and London is in a much worse position than elsewhere at the moment, but it will come to other places. Birmingham is also struggling.”

Three doctors in Britain have died after working with coronavirus patients and the Royal College of Nursing said nurses were being put at risk because of a lack of personal protective equipment (PPE).

At a press conference in Downing Street on Monday, Sir Patrick said data from the department for transport showed a sharp fall in transport use across Great Britain since social distancing measures were introduced.

“The measures are in place. They are making a difference. They are decreasing the contact which is so important to spread the disease and we’re doing a good job at cutting that down,” he said.

“We would expect this, in turn, to decrease the number of people needing admission to hospital.”