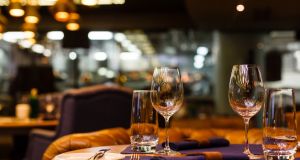 The Restaurants Association of Ireland said “more than two-thirds” of leased premises that it surveyed in a straw poll were unable to get any flexibility from their landlords in relation to rent.

Government action is required to protect the interests of restaurateurs whose landlords are trying force them to pay their rent in full even while closed during the Covid-19 crisis, according to the sector’s national representative group.

The Restaurants Association of Ireland (RAI) says that “more than two-thirds” of leased premises that it surveyed in a straw poll were unable to get any flexibility from their landlords. It wants the State to step in with rental supports, as many restaurants gear up to pay their quarterly rent this week.

“Rents are the new challenge,” said Adrian Cummins, chief executive of the RAI. “Measures to protect restaurateurs from commercial landlords need to be put in place.”

He wrote to Charlie Flanagan, the Minister of Justice, asking for the Government to step in. The Minister replied to him on Monday to say that he would not seek to amend landlord and tenant law to provide a solution, such as enforcing rental holidays or requiring rent-free periods. The Minister indicated it would be fraught with constitutional difficulties.

Many restaurants and other businesses are due to pay three months’ rent on Wednesday this week, April 1st. One high-profile Dublin restaurateur, who has let all his staff go, said he had recently told his large, institutional landlord that he would be unable to pay his next quarterly rent payment.

He said the landlord, through an estate agent, would only offer him a one-month rent holiday, which would have to be paid back by the end of the year.

“I thought it was an April Fool’s joke,” he said. “That is useless to me while the business is closed. But that’s the only leeway I was offered.”

He says he has asked the landlord for a year’s derogation from rent to allow him to rebuild his business once the Covid-19 restrictions are lifted. “Otherwise I’m not going to be able to finish my lease,” he said.

A Dublin city-centre restaurateur said his landlord, a Dublin family who were themselves in the restaurant trade in the past, flatly refused his request for a rent deferral and told him they want to be paid in full this week.

“I expect my landlord to swallow the pill of no rent while my premises is closed,” the restaurateur said.

Another city centre restaurateur said she couldn’t even get a response from the agent acting for her landlord. She said she would continue to pay the rent as she was afraid of breaching the terms of her lease. “But it’s draining all my resources,” she said.

1 We are ‘sale agreed’, but can we go back with a lower offer?
2 Working from home: New costs, new stresses and little relief
3 Eason to lay off 150 staff as it prepares for June reopening
4 Joint accounts: if one of us dies, can the other access the money?
5 ESB shelves plan for €500m electricity generator at Poolbeg
6 HSBC board rethinks overhaul and seeks even deeper cuts
7 Ryanair almost certain to oppose German government’s bailout of Lufthansa
8 ‘Over 1,000’ pubs have interest in Covid-19 insurance test case
9 Covid-19 has turned the volume up on musicians’ cut from streaming
10 ‘I’ve so many outgoings with family life . . . it puts manners on you’
Real news has value SUBSCRIBE