Postponements and cancellations causing huge issues for all broadcasters 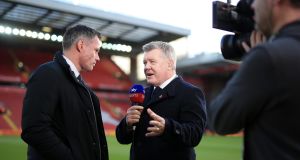 Sky Sports customers who pause their subscriptions during the current live sport blackout can expect not to start paying for the service again until Premier League football returns.

A spokesperson for the broadcaster told The Irish Times that, while it has not been confirmed as to when customers will begin paying again, it is safe to say that it will not be until top-flight English football is back on our screens.

Sky customers who pay for a sports package have been able to pause that part of their bill for over a week now by either ringing customer service or by logging into their account and following the link on the Sky homepage.

The cost of Sky Sports will then be deducted from the customer’s bill each month until live sport returns, while the viewer will still be able to watch the channels which, for the foreseeable future, are taken up by re-runs and documentaries.

Virgin Media customers who have a Sky Sports subscription can also pause their bill by filling out an online form.

Sky had also already stopped taking payments for business sports subscriptions which means places such as pubs, which are currently closed, are not paying.

Premier League football is, by a long shot, the main driver of revenue for Sky Sports, as it is for the other UK and Ireland rights holder BT Sport, and both companies stand to make significant losses over the next period even if the league was to re-start on the current slated date of April 30th, which looks almost impossible at this stage.

With squads currently unable to train and no timeframe really in place for when they might be able to do so, any potential re-start date is likely to be pushed back further and further, eventually eating into the traditional off-season of June and July.

Were that to happen the organisers may be left with no choice but to void the season, an outcome that has been called for by a number of parties already. The other risk, even with playing matches behind closed doors, is that even one infection among players or staff would result in so many people having to go into self-isolation that the league would have to stop again.

According to a report published last week by Enders Analysis, Sky and BT could potentially lose a combined total of nearly £1 billion (€1.125 billion) if live sport does not recommence until August – the traditional start month for football in England – and even that looks increasingly optimistic in the UK with lockdown set to go on for months. And even if that lockdown were to be lifted before August it is safe to assume that the likes of football matches would not be some of the first things to return.

“Assuming a worst-case scenario of a four-month suspension of all sports coverage (British and foreign), with all sports subscribers pausing their contract and wholesale clients being allowed to follow suit, Sky would lose £700m and BT £228m in revenues,” the report says.

Given that Sky and BT have already paid their share of the Premier League’s TV rights deal for this current season, they are losing money every time a match isn’t played, as the likes of advertisement deals go to waste. And that is why a potential option of playing matches behind closed doors may come into effect as soon as is possible in an attempt to finish the current season but also to ease the blow on broadcasters.

And with customers now able to cease paying for sport, potentially for months, the losses add up. The current price of a Sky Sports subscription is €20 a month for the first six months and €40 per month thereafter. Therefore, if Premier League football does not return until August, some customers could save €160 over April, May, June and July. Indeed broadcasters could be left in a very tight situation if the lack of live sport continues beyond August and potentially even into next year, leaving them with essentially nothing to offer customers for months on end.

And while pay-TV companies feel the pinch of the cancellations and postponements brought on by the coronavirus pandemic, terrestrial television is far from immune to the effects.

For the likes of RTÉ and BBC, 2020 was set to be a bumper year with Euro 2020 followed closely by the Olympics. Now both of those events will be held in 2021 along with the Women’s European Championships and all plans for the summer ahead are thrown up in the air.

RTÉ, who hold exclusive Irish rights to both the Olympics and the Euros, had planned to send between 40 and 50 people to Japan for the Olympics while they would usually send three commentary teams to the European Championships.

With both of those events now simply pushed back a year most of the logistics remain broadly similar.

“It’s disappointing but the key to it is that they’ve been postponed for 12 months rather than cancelled so it means we’re in for a bonanza in 2021 and 2022 and what happens for the remainder of 2020 nobody really knows,” says Declan McBennett, head of sport at RTÉ.

“For events that have been postponed there will be a plan set out because people are now working to a different timetable but essentially the timetable is largely known. It looks as if the Olympics will take place at roughly the same time next year [confirmed on Monday as July 23rd] and we already know the dates for the Euros.”

And while logistics can remain largely similar, the postponements could cause issues in areas such as advertising. In the United States NBC is the main rights holder for the Olympic Games and the station recently said that they had already sold 90 per cent of their ads for the Games this summer, taking in a record total of $1.25 billion (€1.13 billion). While most of those contracts would simply be expected to roll over to next year, some companies may not be in a position to fulfil them in 2021, particularly given the expectancy that a global recession is on the way.

Olympic rights holders are also now left with a 17-day period of programming to fill in July and August while RTÉ, who will also be without the Euros this year, are set for a huge drop in expected viewership figures. Whether the GAA football and hurling championships go ahead is the next big question that the national broadcaster is hoping to have a positive answer to.

“We had four big events planned out this year in the Euros, the Olympics, the championships and the Paralympics and now three of them are gone and we don’t know what the story is with the fourth one. So we can plan for the three that are a year away now but we can’t plan for the one that is potentially two months away,” says McBennett.

“In theory if we got out of this by April 19th and get the go-ahead from Government, then the championships could conceivably start on the 10th of May. That’s probably optimistic but there is a second date in there of June 15th whereby if the championships had started then we could still adhere to the current calendar in terms of finishing with changes to the round-robin format.

“We’re very much in a holding pattern now until April 19th and probably, more realistically, some time in May when we know how this is playing itself out. If we’re in a better place than some other countries you might be in a situation where domestic competitions come back but international competitions don’t.”

The lack of live action is having serious effects across the sports media. Last Friday evening Dave Kelly announced on RTÉ Six One news that it would be the last sports bulletin on the programme for the foreseeable future. Elsewhere, the Racing Post daily newspaper has ceased publication for the first time since it began in 1986 until horse racing is back up and running, leaving most of its journalists temporarily laid off, while a number of regional newspapers around Ireland such as the Donegal Democrat, Kilkenny People, Leinster Leader, Leinster Express, Limerick Leader, Longford Leader, The Nationalist and others have temporarily let staff go as advertising sales plummet.

In Italy the famous pink pages of the Gazzetta Dello Sport are still being printed daily as the 1,400 newsstands across the country remain open for business, while also offering a home delivery service of all newspapers after being declared “essential” by the government during the crisis which continues to rip through the country.