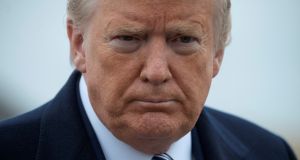 US presidnet Donald Trump told the US people that if they confined the death toll to 100,000 “we” will have done well to contain the disease. Photograph: Jim Watson/Pool via Reuters

The tented field hospital in New York’s deserted Central Park is vivid testimony to the scale of the crisis in the city, now reporting more cases of coronavirus than any other US city. Health workers warn of desperate shortages in personal protection equipment, of masks and gowns being used again and again. New York State reported 237 more deaths overnight on Sunday, the number of confirmed cases jumping by 7,200 in one day, bringing total cases to 59,513. Some 8,500 are currently hospitalised, 2,037 in intensive care.

On Monday Donald Trump, advised by experts that the US could yet see 200,000 deaths, announced further social distancing measures, his publicly expressed hopes, only three days ago, that the economy would be “opened up” by Easter apparently forgotten. He told the US people that if they confined the death toll to 100,000 “we” will have done well to contain the disease.

That “we”, presumably includes the self-obsessed president whose pronouncements from the start have veered from complete denial, to blaming the Chinese, foreigners, state governors, the Democrats, and the media, and whose lack of urgency in ordering tests and in mobilising industry to produce badly needed ventilators, has left this great, rich country struggling to catch up.

Epidemiologists speak of a “lost month”, and even a key member of his coronavirus task force, Anthony Fauci, has publicly acknowledged the testing “failure”. (Fauci now faces a hate campaign from Trump supporters on social media).

The trouble is that tomorrow the president’s message will again change. Trump has repeatedly demonstrated a complete lack of comprehension of the disease and its spread, of what is necessary, in apparent disregard of science. His observation about the virus in a recent interview says it all: that “this pandemic … this disease, this whatever they want to call it, you can call it a germ, you can call it a flu, you can call it a virus … you can call it many different names, I’m not sure anybody even knows what it is.” You don’t have to catch coronavirus to be a “super-spreader”.