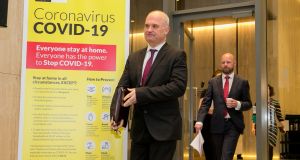 Dr Tony Holohan and Prof Philip Nolan: There are now 2,910 cases of coronavirus in the Republic, and there have been a total of 54 deaths. Photograph:Gareth Chaney

Restrictive Government measures are having an “enormous effect” in reducing the number of new cases of coronavirus, according to the academic tasked with predicting the further growth of the epidemic.

The measures have resulted in a “huge” fall in the growth rate of the outbreak but it will take from seven to 14 days before the full impact of the measures will be known, said Prof Philip Nolan, president of NUI Maynooth.

He was speaking after the deaths of eight more patients diagnosed with Covid-19 were announced by the National Public Health Emergency Team (NPHET) on Monday evening.

The patients, who had a median age of 86, included five women and three men. Six of the patients had underlying conditions.

The number of newly confirmed cases was 295, the second-highest daily number so far. There are now 2,910 cases of coronavirus in the Republic, and there have been a total of 54 deaths.

On Monday, Northern Ireland recorded another coronavirus fatality, bringing the North’s death toll to 22. A further 123 infections were also identified, bringing the number of confirmed cases to 533.

Prof Nolan, chair of the NPHET Irish epidemiological modelling advisory group, warned there was “no room for complacency” and the growth rate of the disease would have to be reduced to “close to zero” in order for it to be suppressed.

The daily growth rate of new cases has more than halved in recent weeks, from 33 per cent to about 15 per cent, he pointed out. As a result, Ireland is not on track for the “unmitigated epidemic” scenario that saw predictions earlier in March of 15,000 cases by the end of the month.

Prof Nolan declined to make any specific forecast for the future progress of the disease, saying the model used by the team of epidemiologists he leads was “too sensitive” to assumptions.

“People need to redouble the efforts they’re making to prevent the spread of infection from one person to another. If they continue to do that, I do expect the growth rate to fall over next week.”

Chief medical officer Dr Tony Holohan also warned against complacency as the number of cases and intensive care unit (ICU) admissions increases but acknowledged “we are beginning to see encouraging signs in our efforts to flatten the curve”.

The Government on Monday reached an agreement with private hospitals for their temporary use during the Covid-19 crisis.

He said that the move would free up 2,000 beds across 19 hospitals, including nine labs, 47 ICU beds and 194 ventilators.

Under the agreement, the HSE has secured 100 per cent of the capacity in those private hospitals. All patients will be treated as public patients. The hospitals will be reimbursed for their operating costs.

Mr Varadkar said it was not possible at this time to indicate a precise cost for the move but said independent accountants would examine the issue. The agreement is in place for three months with an option to extend that afterwards.

Following a meeting with Simon Harris, Nursing Homes Ireland said the Minister for Health committed to immediately address personal protective equipment and staffing issues and to bring forward a package of financial supports for nursing homes before the end of the week.

The NPHET is due to consider measures for nursing homes at its meeting on Tuesday.

Earlier, a HSE analysis showed there have been 22 outbreaks of coronavirus so far reported in nursing homes across the State.

NPHET officials meanwhile declined to specify delays in the testing programme, following the closure of the centre at Páirc Uí Chaoimh in Cork at the weekend over equipment shortages.

HSE chief clinical officer Dr Colm Henry said there had been “huge challenges” sourcing equipment internationally and it was hoped to reopen centres once stocks had been replenished.

The President, Michael D Higgins, in a statement urged people to “keep the faith, stay patient and vigilant”.

“The days ahead will be difficult, for all of us, but what a memory it will be when the virus has passed, to know that we gave of our best. Let us not forget ever that we are not travelling through the darkness alone, but that we are on this journey together.”

In Italy – which is the world’s hardest-hit country in terms of number of deaths, accounting for more than one-third of all global fatalities – the total death toll rose by 812 on Monday, reversing two days of declines, although the number of new cases rose by just 4,050, the lowest increase since March 17th. Total deaths there are now 11,591, while the total number of confirmed cases stands at 101,739. However, the decline in the rise of new infections may be partly explained by a reduction in the number of tests.

The number of patients being treated for the coronavirus in British hospitals has jumped by 50 per cent since last Friday to 9,000, with 1,000 admitted every day.

1 Donald Trump is in trouble, and that could spell very bad news
2 Larger retail stores to reopen on Monday ahead of schedule
3 O’Doherty and Waters ordered to pay legal costs of case against State over Covid-19 laws
4 Strict rules on queuing as Dublin shops prepare to reopen
5 Coronavirus: Five more deaths brings toll in State to 1,664
Real news has value SUBSCRIBE