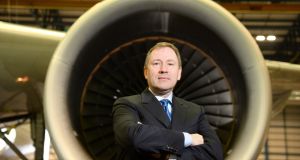 Aer Lingus chief executive Stephen Kavanagh: “All that will be on offer will be the space and the comfort. We are not going to be reintroducing bespoke catering”. Photograph: Dara Mac Dónaill

Aer Lingus is planning to reintroduce business class services on its busiest short-haul routes in Europe next year, having axed them in 2002.

This is tied to the introduction of new long range (LR) single aisle A321 aircraft that will be introduced on its long-haul services to the east coast of the United States from late 2019. These 186-seat aircraft will accommodate 16 business class passengers across the Atlantic, and the airline plans to also use them on certain routes from Dublin to other European destinations.

“We will have 15 aircraft arriving before 5am across the Atlantic [each day],” Aer Lingus chief executive Stephen Kavanagh told The Irish Times. “At the moment, passengers getting a business class experience across the Atlantic transfer on to an economy aircraft [when travelling onwards to a European destination].

“When we have the LRs going on into Europe, they will now have a business cabin with full lie-flat seat. So they’ll get consistent service from all of the gateways in North America to the principal gateways in Europe.”

In the event that there aren’t enough transatlantic passengers transferring to short-haul flights out of Dublin, Mr Kavanagh said the airline would sell the seats locally.

“We expect there to be a lot of demand,” he said. The service will be available on a number of flights out of Dublin, including to London, Paris, Amsterdam and Barcelona, which are among the most popular onward destinations for American travellers.

“It will be offered from the third quarter of 2019,” he said. “The first of the aircraft arrives in June into service, the second in August and then we’ll start to schedule the aircraft on to the principal high-volume business routes into Europe.”

Eight of the 14 new aircraft will fly onwards to Europe, Mr Kavanagh said.

“It will give us the ability to offer a full end-to-end business cabin experience to the five or six principal European destinations. That gets us 50 to 60 per cent of the opportunity,” Mr Kavanagh said.

Mr Kavanagh, who steps down as Aer Lingus chief executive at the end of this month, added: “All that will be on offer will be the space and the comfort. We are not going to be reintroducing bespoke catering. There will be catering but it will be the same as you buy on board, it will just be complimentary. We will keep the process relatively simple.”

1 How to avoid a communication breakdown
2 How much state pension will I get next year?
3 Brexit to curb services trade with UK, accountants group warns
4 PTSB plays down Ulster Bank talk as it sells €1.4bn of loans
5 Am I crazy to consider switching to an Ulster Bank mortgage?
6 ‘It’s fantastic living here – in the gateway to Asia’
7 Oxford Covid vaccine trials offer hope for elderly
8 Can we finally say farewell to the scourge of hot-desking?
9 Irish tech company Asavie acquired by Nasdaq-listed Akamai
10 Help, I’ve no PRSI stamps – can I still get a pension?
Real news has value SUBSCRIBE