Some 998 incidents reported on Luas trams between January and the end of October, ranging from disorderly behaviour to assault 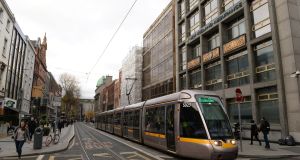 Overall, crime and antisocial behaviour on trams has decreased in the past two years but Transdev said it remains concerned about racist and other forms of abuse directed toward its staff. Photograph: Dara Mac Dónaill / The Irish Times

Children as young as nine are among the main problems faced by mobile Luas security teams combating antisocial behaviour, the company has said, with an area on south Dublin’s green line proving to be one of the most problematic.

Passengers on the red line, often those with addiction issues travelling to access services or hostels, “cause little if any actual trouble”, Transdev said.

By contrast, children between the ages of nine and 15 “can be the most troublesome group”.

“Loud and fearless, they don’t understand their behaviour is upsetting others. Security’s role here is to move them on, to be customer focused, friendly and authoritative.”

Overall, crime and antisocial behaviour on trams has decreased in the past two years but Transdev said it remains concerned about racist and other forms of abuse directed toward its staff.

There were 998 incidents reported on all Luas trams between January and the end of October this year, ranging from disorderly behaviour to assault. That figure was down from 1,189 for the same 10-month period in 2017, a reduction of 16 per cent.

“Transdev spends over € 2.5 million on security per year. The number of ASB (antisocial behaviour) incidents is on the decrease; however, what is disappointing is the level of racial and verbal threats experienced by staff,” it said.

Reports of theft and robbery offences have increased marginally (43 to 45), as have threats to the public (44 to 48). However, other categories – public disorder, antisocial behaviour and physical assaults – have fallen.

Notably, the number of threats to Luas personnel halved from 73 to 37 during the 10-month periods.

“In addition to the teams on the network, we also operate mobile response teams; that when called by the Luas control room, travel by car to the affected stop or tram to assist with the issue. This team primarily responds to incidents outside the city centre,” the company said, adding that these mostly related to loitering.

“Interestingly; these groups often comprise of nine- to 14-year-olds . . . and our approach is to work with them, their schools and community gardaí. An area south of Sandyford on the Luas green line can at times be one of the most problematic areas.”

While sporadic organised criminal activity such as pick-pocketing can target the transport system, this is not exclusive to the red line

Gardaí are not overly concerned about security issues on the red line between the city and Tallaght – the view being that perceptions of potential threats can be out of kilter with reality.

While sporadic organised criminal activity such as pick-pocketing can target the transport system, this is not exclusive to the red line, nor to the Luas network among wider public transport.

There have been infrequent cases of minor sexual assaults – passengers being groped on packed carriages – but where these are reported they are generally solved thanks to high quality CCTV footage. In one such case a man was prosecuted and banned from all public transport.

Tram drivers have panic buttons in the case of severe incidents but these are considered relatively rare.

“There is a certain level of crime on it, but it is not huge,” said Insp Brian Cullen, who is based at the Bridewell station along an inner city stretch of the red line and who has been in Dublin since the service began operating almost 15 years ago.

“I have seen judges getting the Luas from the CCJ [Criminal Courts of Justice] to the Four Courts but then there are also those who have to come in [to the city] to access [addiction] services.”