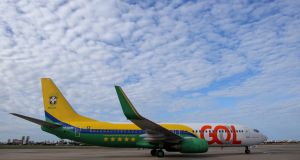 Avolon said on Monday that it has agreed to lease 11 of the Boeing 737 Max 8 craft that it has on order from the US manufacturer to Rio de Janeiro-based Gol.

The Irish company intends to begin delivering the planes to Gol from the middle of next year.

Felipe Campos, Avolon’s head of Latin America, pointed out that the company’s relationship with Gol went back to the earliest days of the airline, which began flying in 2001.

He noted the craft would boost the airline’s efficiency and reliability and allow Gol to expand.

“Our commitment to our customers is to have a product offering built around the latest and most technically advanced aircraft available in the market and the 737 Max is a core part of that offering,” he said.

“They have a deep understanding of the Latin American market and we look forward to working with Avolon and their team for many years to come,” he added.

Gol is listed in New York and Sao Paulo. It had revenues of $9 billion last year and profits of $70 million.

The carrier has almost 40 per cent of Brazil’s domestic air travel market and around 10 per cent of its international traffic.

Dublin-headquartered Avolon is one of the biggest aircraft lessors in the world.