Random tweets and infighting have caused no end of problems for Elon Musk, chief executive officer of both Tesla and Space Exploration Technologies. The CEO spoke about the controversies in a wide-ranging interview with CBS’s 60 Minutes. Video: CBS 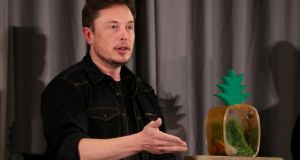 Tesla chief executive Elon Musk disputed a tweet by CBS’s 60 Minutes that stated he didn’t want to be the carmaker’s chairman again.

Teasing its interview with the Tesla founder, 60 Minutes tweeted that Mr Musk had replied “No” when asked if he wanted to return to the role. Mr Musk called the tweet misleading because it didn’t include his full response to the question. His full reply was: “No. I actually just prefer to have no titles at all,” according to footage of the interview.

Mr Musk relinquished the post of Tesla chairman last month under a settlement with the Securities and Exchange Commission over his tweeting in August about trying to take Tesla private. In the 60 Minutes programme, Mr Musk said that he handpicked the new chairman Robyn Denholm and that it was unreasonable to expect her to watch over him.

“That’s not realistic,” he told the programme. “I am largest shareholder in the company and I can just call for a shareholder vote and get anything done that I want.”

Elon Musk had to step down as Tesla’s chair. So did he lose power? He handpicked his successor, and when asked about her watching over him, he says: “That's not realistic… I'm the largest shareholder in the company.” Does he want to be chair again? “No.” https://t.co/hHN5M5JjZW pic.twitter.com/Dmchut0M5Q

Tesla is set to offer $837 million of bonds backed by auto leases in its second trip to the market for asset-backed securities this year. The electric-car maker is betting investors will look past broader market volatility to load up on the securities, which may sell as soon as this week, according to people familiar with the matter.

The company found strong demand for its inaugural bond sale in February, and sources said at the time that it had plans to become a regular issuer in the ABS market. The largest portion of the offering, a $674 million slice, may carry Aaa ratings from Moody’s Investors Service, said the sources, who asked not to be named because the deal is private. Citigroup and Deutsche Bank are managing the sale.

While Tesla is building an asset-backed bond program, it’s seeking to cut its reliance on other parts of the capital markets. Mr Musk told investors on an October conference call to discuss earnings results that the company was focused on reducing its debt load and didn’t intend to raise equity or debt, though that could “change in the future”.

Tesla’s earlier track record in the capital markets has been mixed. The auto lease bonds it sold in February trade hands near par, while $1.8 billion of high-yield notes the company sold in 2017 have whipsawed this year amid Mr Musk’s failed plan to take the company private. The junk debt now trades below 88 cents on the dollar. Convertible bonds have fared better, and the company has notified the holders of notes due in March that it may repay the debt with a mix of cash and stock. – Bloomberg