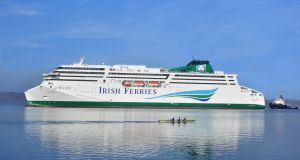 The cruise ferry, which measures 195 metres in length, will offer up to four sailings a week directly from Dublin to France.

The WB Yeats cruise ferry, which was originally scheduled to begin travelling between Dublin and France almost five months ago, is expected to dock in the capital next week, Irish Ferries has said.

The shipping company cancelled 6,000 bookings on the ferry in August and September, with the travel plans of at least 19,000 people affected.

This followed the cancellation of all bookings on the WB Yeats for more than two weeks in July, which affected about 10,000 people.

The company blamed “extraordinary circumstances beyond its control”.

The delivery of the €147 million vessel had been delayed by German shipbuilder FSG which, in a statement, attributed the delay to receiving parts late from suppliers.

Several hundred holidaymakers who were forced to rearrange their travel plans were then told their rescheduled crossings had also been cancelled after the Epsilon was diverted to ferry passengers on the Dublin-Holyhead route.

Passengers expressed anger at the difficulties they encountered in trying to make contact with the company when the cancellations were announced.

The company accepted there had been problems with communications. It said it had been dealing with “an extremely high” volume of calls and had to contend with “a technical fault” on Tuesday which was “external to Irish Ferries”.

Sailings cancelled in July cost Irish Continental Group (ICG), the company’s parent, €7 million, with most of it linked to re-accommodating customers. Overall, cancellations left ICG with a €13 million bill made trading during the peak summer.

Revenue fell 1.3 per cent at ICG in the first 10 months of the year as a result of sailing disruptions and schedule changes.

In a statement on Wednesday, Irish Ferries said it was “delighted to confirm the upcoming arrival of the all-new WB Yeats, which is expected to dock in Dublin next week”. It will carry 1,800 passengers in 440 cabins.

The cruise ferry, which measures 195 metres in length, will offer up to four sailings a week directly from Dublin to France. It will travel 125,000 nautical miles per annum, which is the equivalent of circumnavigating the globe nearly six times.

It will sail from mid-March to the end of September. Holidaymakers are being offered 10 per cent off when they book their summer sailing before January 15th.