Where it all went wrong for Facebook’s Libra cryptocurrency

Facebook was blindsided this month when seven high-profile partner companies, including eBay, PayPal, Visa and Mastercard, stepped back from its Libra project 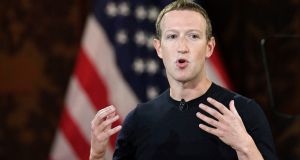 Facebook chief executive Mark Zuckerberg in Washington on Thursday. The final straw for libra supporters came, it has been said, after he was called to testify before Congress. Photograph: Nick Wass/AP Photo

When Facebook unveiled ambitious plans in June to spearhead the creation of a global digital currency, co-founder David Marcus promised unprecedented co-operation between some of the biggest names in technology and payments.

“Everyone will play their role,” the Facebook executive said of the 28 initial founding members of his libra scheme.

But this month, Facebook was blindsided when seven of the high-profile companies, including eBay, PayPal, Visa and Mastercard, stepped back from the project, leaving its future hanging in the balance.

How did Facebook’s currency unravel?

Members of the so-called Libra Association became wary of the project after regulators and politicians across the globe warned that a mass-market digital currency could pose a threat to the financial system, as well as lead to money laundering and increased financing for terrorism.

Some former members felt Facebook underestimated the regulatory scrutiny that the project would draw, and had oversold members’ commitment, which at that stage consisted of signing a non-binding agreement to contribute at least $10 million (€9 million) to its coffers in the future.

Several also said that despite its ambitions to promote libra as a joint effort, the project had been tied too closely to Facebook at a time when the company is grappling with numerous privacy-related scandals and a flurry of antitrust investigations in the US and Europe.

“Facebook has been a lightning rod,” one former member said, adding that there was a “perception gap” between what Facebook thought would be a “tremendous rollout” and the gravity of the partners’ concerns.

The final straw, several people said, came after Mark Zuckerberg, Facebook’s chief executive, was called to testify before Congress and several Democratic senators wrote to the payments members urging them to rethink their involvement.

According to one person with knowledge of the situation, there were private discussions among the big regulated payments members, wrangling over whether to pull out around the same time given how “polarised” the project had become.

While those with existing business relationships with Facebook found the decision tricky, others noted that the payments companies in particular were also likely motivated by their own commercial reasons.

“It is not surprising that it was mainly the payments companies who left – they are the ones who stand to lose most by the emergence of a digital competitor,” said one person close to the project. “If they had stayed in, it would have been a case of having the fox inside the chicken coop.”

Why do the dropouts matter?

The initial participation of those members lent the project public credibility and regulatory viability. Without them, the scope of libra’s ambitions may have to be adjusted.

While they never outlined precisely how libra would be a part of their businesses, those members would have helped bolster adoption of the currency through their vast networks.

As an ecommerce giant, eBay could have encouraged thousands of customers to use the low-cost currency on its platform when people made purchases for items sold in a different currency, for example.

Libra could have tapped the merchants that use the online payments processors Stripe (founded by Limerick brokers John and Patrick Collison) or PayPal if the currency was integrated into their services. Facebook also indicated that PayPal would have offered wallet services for holding libra, as its own subsidiary Calibra plans to do.

Mastercard and Visa could have also ensured libra was widely accepted online and in shops. “Losing payments firms like Visa and Mastercard, and their ubiquitous payments rails, could be a major setback for the use of Libra in everyday payments, like buying coffee,” said Garrick Hileman, research associate at the London School of Economics and head of research at blockchain, a cryptowallet company.

Their support would also have helped the project overcome regulatory challenges, according to Preston Byrne, partner at law firm Byrne & Storm. “If any other new business, based overseas, were attempting to obtain US payment processing for this offering under a normal merchant agreement with a credit card processor, it would almost certainly be held up on the grounds that the business was high risk,” he said.

“Libra needed preferential treatment from the main online payments providers ...in order to get over this hurdle,” he said, adding that the payments companies were now “likely to insist that the Libra Association deals with them on arm’s-length commercial terms”.

But Dante Disparte, Libra’s deputy chairman, said “there was no reliance on any company in any particular sector to help drive the compliance of the association”, adding that “given the opportunities this project represents”, those players could still support libra as a form of payment in the future even if they were not part of the initial governing body.

What are the challenges ahead?

The future of the project will now depend largely on whether it can garner the required regulatory approvals, which may involve making some changes to the shape of the project, and on how the remaining backers engage with it.

But even the remaining members are shaky, with some expressing reservations and monitoring for future disruptions. “The dominoes are falling,” one current member said.

One criticism levelled by some is that the company should have pegged libra to the US dollar to create a more straightforward payments system, rather than an entirely new currency. Others are urging Facebook to take a more back-seat role going forward.

Still, Libra’s executives have signalled that they will press ahead, despite admitting that they may well miss the target of launching by the end of 2020 and will only launch if they have approvals from US and EU watchdogs.

One person closely involved with Libra said they believed early conversations with the US Treasury about the project had been “pretty good” and that some sizeable banks were among the more than 1,500 organisations that have expressed interest in signing up as Libra partners in future. According to Libra, 180 of those meet the criteria for potentially becoming a member.

Following its first official meeting on Monday, the association said it had appointed a five-strong board and signed off on an initial charter.

“It’s nuts, it’s crazy town,” the person said of the regulatory spotlight on the project. “[but Libra has] more than doubled down on this. They are not going to bring in Mark Zuckerberg to Capitol Hill if they are going to just drop it.”

Facebook founder Mark Zuckerberg says in a new year’s resolution note that he intends to “study the positive and negative aspects” of cryptocurrencies.

Facebook establishes a division to “explore how to best leverage blockchain” across the platform. David Marcus, the former president of PayPal and head of Facebook Messenger, is announced as leader of the team.

The plan draws immediate scrutiny from global regulators, central bankers and politicians, such as the G7 and US president Donald Trump. They cite money laundering and terrorism financing concerns, as well as the risks it could pose to wider financial stability.

Mr Marcus faces two days of bruising hearings in Capitol Hill from hostile politicians, who warn that Facebook should not be trusted to run a digital currency following its recent data privacy scandals.

The European Commission launches an antitrust investigation into libra, amid concerns that the currency could unfairly disadvantage rivals.

Mark Zuckerberg is called to testify on the project before Congress later this month. Meanwhile, two Democratic members of the Senate banking committee write to Visa, Mastercard and Stripe warning that their existing businesses will come under increased regulatory scrutiny if they continue their involvement.

A wave of companies say they are quitting the project ahead of its first board meeting on October 14th.

1 Are there annual limits on inheritances or gifts to a child?
2 Opioid executive admits to ‘no morals’ ahead of prison term
3 South Dublin Credit Union members urged to borrow more to ensure survival
4 American YouTubers embrace the crisp sandwich
5 Who are Ireland’s 17 billionaires?
Real news has value SUBSCRIBE