Airthings Wave Plus: This air quality monitor is gas altogether

Tech review: The device can detect radon, CO2 and other pollutants, but can’t fix them 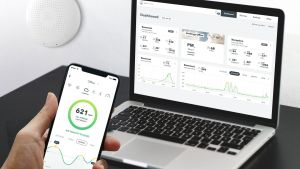 The Wave Plus is simplicity itself: Green is good, red is bad

Do you know how good the air quality is in your home? Up until a couple of years ago, I would have said no. Then I discovered air purifiers and since then I’ve become mildly obsessed with my rating.

There are different things that affect air quality, from paint fumes and cooking to pollen and radon. In the short term it might give you a headache; long term, the effects can be much worse.

So when the Airthings Wave Plus landed on my desk, it was another thing to monitor my indoor pollution.

The device has a very simple system for showing you how good your air quality is. Wave your hand in front of the monitor and a small inner ring glows green when things are going well; orange is a warning and red indicates danger.

It is similar in size and shape to a smoke or carbon monoxide detector. All you have to do is fit it to your wall, connect it to the smartphone app, and you can keep a close eye on your air quality.

The Wave Plus comes with smart radon detection, which was what intrigued me; I’ve heard radon mentioned a few times in the past, usually as something to be wary of. It’s a naturally occurring gas, but just because it’s natural, it doesn’t mean it is safe. According to the EPA, radon is a known carcinogen, and exposure to it can cause lung cancer.

If you want to know the levels of radon in your area, the EPA has a map of the country colour coded to show where there are low, medium and high levels of the gas.

Around Carlingford, for example, 20 per cent of the homes have higher levels of radon than the reference level, which makes it a high-radon area. Ditto for Ballina, Tuam, Sligo town and New Ross in Co Wexford. There are pockets in almost every county that would be classed as a high-radon area. That doesn’t mean that homes in low-radon areas won’t experience high levels of the gas; it is just that they are less likely to.

Likewise, just because you live in a high-radon area, it doesn’t mean the gas is seeping into your home. Building regulations stipulate certain measures have to be taken to protect homes located in areas classed as high-radon, including installing radon barriers.

So having a monitor is a useful, if not essential thing to install.

The battery-operated Wave Plus measures volatile organic compounds and carbon dioxide in addition to the aforementioned radon. The app will also display temperature, air pressure and humidity. It takes a couple of days for the monitor to build up enough data that it can show trends in the app, so don’t expect miracles from the off. But the monitor itself did provide some useful information.

I activated the monitor before I left the office, which is in Dublin’s city centre, and put it in my bag to take it home. The ring at that stage was glowing green. By the time I got home, the ring was glowing an ominous orange. Checking out the app later on showed a spike in total volatile organic compounds, which would have coincided with me walking through traffic-choked city streets. Even inside my bag, the sensors appeared to pick up the pollution around me.

Over the next 48 hours, things changed a little. The orange ring disappeared and was replaced with a green one – except for the time when I forgot about dinner and burnt it – and the trip home was consigned to an ugly blip in the weekly and monthly trends.

The radon reading, the one I was most concerned with, has remained green and far below the danger zone, both at home and in the office.

Carbon dioxide, funnily enough, was the one that seemed to tip into the orange zone more often than I’d expect. But that is easily fixed with a few open windows and vents.

The simplicity of the Wave Plus system is a benefit. Green is good, red is bad, and the app will give you all the information you need in between.

The anxiety caused by the glowing orange ring. Until you open the app, you aren’t sure if it’s carbon dioxide, the dinner fumes or the radon that is coming for you.

The Wave Plus will only tell you that you have a problem; it won’t fix it for you. The app will give you some advice, though. If you are buying an air purifier, make sure it is one that is proven to remove particles that are as small as 0.1 microns. That is where radon gas sits, while something like smoke from cooking oil is 1 micron and pollen is 10 microns.

There is also some integration with IFTTT and Alexa.

If you thrive on data and want to know everything about your home, the Wave Plus will give you the information you need. Acting on it, however, is up to you.