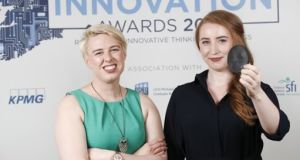 Eimear O’Carroll and Rhona Togher set up Restored Hearing in 2009. Their first product was a tinnitus therapy to help reduce the hearing condition

The company has also announced 18 new jobs at its Dublin office.

The funding, which was won through the EU Horizon 2020 SME Instrument programme, will help the Irish launching it globally to multiple industries, including the automotive and aerospace industries.

The Dublin-based company, which was a previous finalist in The Irish Times Innovation awards, uses metamaterials to create material that can absorb sound while remaining lighter than traditional noise reduction solutions. According to the company, SoundBounce is thinner than traditional materials, performing 100-1,000 times better particularly at low frequencies.

The new material is designed to help deal with noise pollution, which has repercussions for human health and wellbeing, and the environment.

“There is a major opportunity for new solutions in the acoustics space as it has been technologically stagnant for decades,” said Restored Hearing chief executive Rhona Togher. “This funding from Horizon 2020 enables us to complete the scale up and industrialisation of the technologies – building it into the next generation of cars, buildings and planes.”

Restored Hearing is working with a number of academic institutions and labs, including Trinity College Dublin and the University of Limerick, to work on refining the acoustic metamaterials.

The company plans to launch the material for use in the construction, automotive, power generation and aerospace industries, with consumer demand for quieter products and regulations governing noise pollution expected to be a driver.

Restored Hearing is also expanding its workforce in preparation, with 18 jobs at its Dublin headquarters in areas such as project management, predictive modelling, business development, acoustics and material science. Recruitment is already under way, with some of the roles filled.

The company was founded by Ms Togher and Eimear O’Carroll in 2009, with its first product a tinnitus therapy to help reduce the hearing condition. Sound Relief was showcased at the BT Young Scientist and Technology Exhibition 2009, where the duo won the runner-up prize.

The company has a number of backers, including SOSV and Enterprise Ireland.

“Restored Hearing is a great example of a high potential start-up with global ambition which has gone on to win significant innovation funding at a European level,” said Garrett Murray, national director for Horizon 2020 at Enterprise Ireland. “Ireland’s highly innovative SMEs are excelling in Europe through the competitive Horizon 2020 SME Instrument, which is now known as the European Innovation Council (EIC).”

1 Trump vs Biden: Stakes are high for the Irish economy
2 Will remote working become the norm?
3 Tighter regulations for car makers will drive buyers to choose electric
4 Bought a desk or a chair? Revenue rules out tax relief for home workers
5 Losses balloon at Virgin Media Ireland but revenue rises
Real news has value SUBSCRIBE