Breakthrough creates robots with ability to respond to natural environment 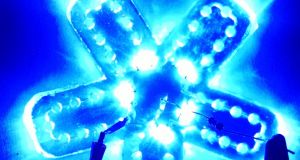 Small biosensing robots may soon have a role in medicine and agriculture.

Scientists at Carnegie Mellon University and the University of California have created a tiny robot that can be controlled by bacteria. This doesn’t mean hordes of bacteria have become sentient and are driving nanobots about, but rather they are indirectly controlling a robot in certain conditions.

Bacteria can be genetically engineered to emit fluorescent light in response to the presence of a certain chemical and this light can serve as a cue. Researchers placed E. Coli inside a soft 3D-printed robotic grip equipped with an LED sensor. When the E. Coli inside the bacteriobot detects the presence of a chemical activator called IPTG it glows fluorescent and is “seen” by the LED sensor that triggers a pre-programmed “pick and place” action by the robot arm.

This might appear to be nothing more than a little robotic device carrying out a rudimentary task of picking up and dropping an object, but it shows that living cells can give robots the ability to respond to the natural environment. These biosensing soft robots may one day be widespread in various fields including medicine and agriculture.