SaaStock brings 4,000 founders, executives and investors to the city for three days 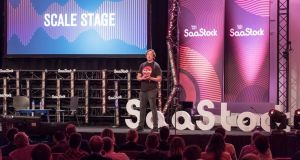 The first speakers for this year’s annual SaaStock conference in Dublin have been named, with senior representatives from Stripe, HubSpot, Salesforce, Intercom and New Relic among those participating in the software-as-a-service (SaaS) focused event.

Now in its fourth year, SaaStock brings together 4,000 founders, executives and investors for three days in the city for what is Europe’s largest SaaS-focused gathering.

The event, which takes place from October 14th to October 16th, consists of a two-day conference in the RDS and a one-day accelerator alongside satellite events happening across Dublin.

This year’s conference promises more than 40 hours of content, including keynote talks, panel discussions and workshops. It also hosts an extensive SaaS exhibition featuring over 250 exhibitors, a dedicated investor zone offering the opportunity to meet with more than 300 SaaS-focussed investors, and a number of facilitated networking opportunities.

A range of fringe events are also taking place, including the SaaS.City bootcamp and the SaaSociety scaling retreat.

“This year’s conference will focus on some of the key challenges facing SaaS leaders today, such as finding product-market fit, acquiring and retaining customers, securing funding, hiring for scale, creating and maintaining company culture and expanding internationally. It will provide attendees with the playbook to building a great SaaS business,” said founder Alex Theuma.

Founded in 2016 in Dublin, SaaStock is now a global affair with events taking place in the US, Asia, Australasia and Latin America.