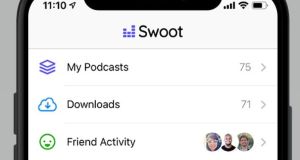 Swoot is an app that adds a social element to podcasts.

There are plenty of good quality podcast apps out there. The only problem is that they make it difficult to share podcast episodes with friends and, in turn, to see what your friends are listening to. Swoot is an app that adds this social element. All it needs is momentum and a sizeable userbase.

I have been using Pocket Casts for years because it syncs easily across Android, iOS and desktop devices; you can start listening on an iPad and continue on your Samsung smartphone. It also works well with Alexa. So, I’m not entirely convinced that I will change over to a new app just for the social aspect, but Swoot does make the switch easy: a few taps from Pocket Casts and my subscriptions were transferred over to Swoot in seconds.

It hooks into your Twitter and Facebook accounts as well as phone contacts to find friends, which translates to a Friend Activity timeline where you can see podcasts recommended by people you know, and what they’ve been listening to lately. And your podcast recommendations can be shared simultaneously to your other social networking accounts.

If there were enough people using Swoot it might be appealing, but one thing I found off-putting was their Trending timeline. Rather than a curated list of interesting shows a la Pocket Casts, this was a ranking of episodes getting heavy rotation from the wider Swoot userbase, and there were two explicit ones (with no labelling) in the top 10, making it too easy for younger listeners to stumble upon such content.