Apollo 11 podcast is one giant leap for space history buffs

Weblog: 13 Minutes to the Moon launched in time for 50th anniversary of moon landing 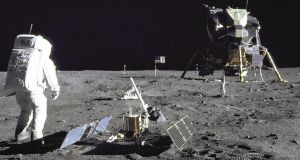 Buzz Aldrin on the moon in this July 20th, 1969 handout. The BBC World Service podcast features interviews with Michael Collins (who looked on from orbit) and Margaret Hamilton,the computer programmer whose code took them to the moon. Photograph: Reuters/Neil Armstrong/Nasa

But how did they get there? How did America win the space race when Russia had already launched Sputnik and safely brought back Yuri Gagarin from his trip to become the first human in outer space? How did president Kennedy’s 1962 declaration “we choose to go to the moon” translate into the science and technology that created the Saturn V rocket?

If you want to hear the backstory, have a listen to 13 Minutes to the Moon, a new podcast from the BBC World Service. You will find some great interviews with Michael Collins (who looked on from orbit) and Margaret Hamilton, the computer programmer whose code took them to the moon. Additionally, you get a glimpse into 1960s science and society, as well as the Cold War-dominated geopolitics of the time. A treat for space history buffs.

1 BOI customers to be charged twice with bank fees on New Year’s Eve
2 How to gift your child a house deposit . . . tax free
3 Irish designer of Oxford vaccine: ‘I’ve never worked so hard in my life’
4 We continue to ignore massive pensions elephant in the room
5 Son putting elderly dad under pressure to sign over land
Real news has value SUBSCRIBE